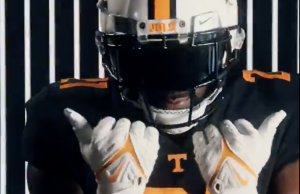 Tennessee is flipping on dark mode this weekend against South Carolina in Neyland Stadium.

For the first time since 2009, the Tennessee Volunteers will debut an alternate black football uniform combination.

The Vols’ new pants and jerseys are black with orange decals and orange numbers. The pants will feature two solid orange stripes on top of the base black color, and the Vols’ will also return to black cleats instead of white ones. Additionally, Tennessee is unveiling a brand-new helmet design as well. Black trim now outlines the solid orange stripe down the middle of the helmet and outlines the Power T on the side.

The last time the Vols wore black jerseys was in 2009. The game was also an October matchup with South Carolina. Tennessee won that Halloween night game by a score of 31-13.

Currently, there is no word on the plans for this uniform beyond the South Carolina game. It could be a one-week surprise here in Josh Heupel’s inaugural season from the athletic department. However, Tennessee could always bring back the jerseys this season if they want to.

So far this season, through five games, Tennessee has worn four different uniform combinations. Tennessee is undefeated in their traditional look of an orange jersey with white pants, which was worn against Bowling Green and Tennessee Tech. In the second week, during the Johnny Majors Classic in Knoxville, Tennessee wore their all-orange uniform combination in a loss.

Tennessee began its road schedule by breaking out the white jerseys and orange pants in a loss to Florida. However, the Vols’ bounced back against Missouri the following week, wearing their all-white “Stormtrooper” look on the road.

Tennessee will host South Carolina this Saturday in Neyland Stadium. Tennessee will debut their all-new black uniform combination during the game on ESPN2 at noon ET.