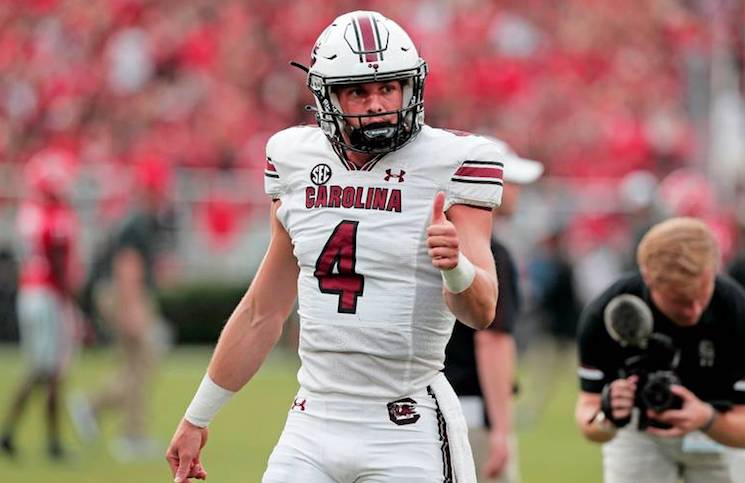 A little over nine months into the job, and a month into his first season, what have been your impressions of Shane Beamer?

I think the biggest thing that stands out with Shane Beamer is his sincerity. He is who is. In a profession where there’s fewer and fewer personalities like that, it’s been refreshing for the team, fans and media members alike. There’s clearly a standard, culture, whatever you want to call it being set up in Year 1 and that’s permeated throughout the building from Beamer and the rest of his staff.
How would you assess how Luke Doty has played these last three weeks and what does he bring to the table?
Doty has been largely impressive. He set career marks for passing yards, completions and attempts in last week’s win over Troy. I don’t think South Carolina can quite rely on him to go win a game for them just yet. For all intents and purposes, he’s a true freshman given he played a huge chunk of last season at receiver. Doty isn’t a polished product and the foot injury that forced him to miss the first two games is still affecting his mobility a bit, but he’s done basically everything South Carolina has needed out of him.
South Carolina’s offense has been mostly ineffective, what are its biggest issues?
I think it starts with the running game. Kevin Harris missed the opener coming off an offseason back procedure and Beamer told reporters this week he was also limited due to an undisclosed illness. That said, he hasn’t gone for more than 49 yards in any of his first four games. Outside of Harris, freshman Juju McDowell has been the clear-cut No. 2 guy ahead of ZaQuandre White and MarShawn Lloyd. McDowell gave South Carolina a major spark against ECU and was a big piece of why the Gamecocks won that game. Doty isn’t a guy that should have to throw the ball 34 times per night like he did last week. South Carolina needs to find some kind of rushing attack to open things up in the passing game and keep defenses honest.
South Carolina’s defense has been very solid this season. What are its strengths and
weaknesses?
Jaylan Foster, Jaylan Foster and Jaylan Foster. Ok, I kid. That said, Foster has played like a first team All-American this year and is currently tied for the nation’s lead in interceptions. Throw in two forced fumbles and his 39 tackles — which lead the team — there aren’t many defensive backs in America playing better than him right now. Beyond Foster, this is probably one of the three or four best defensive lines in the SEC. Zacch Pickens and Jordan Burch are former five-star recruits. Kingsley “JJ” Enagbare is a likely first round pick come the spring and Aaron Sterling has been a stalwart at the opposite defensive end spot. Add in a couple other productive pieces in defensive tackle Jabari Ellis and Georgia State transfer Jordan Strachan — who tied for the FBS lead in sacks last year — and this group legitimately goes two or three deep at every position.
What’s a matchup you feel like South Carolina can exploit against Tennessee or vice versa?
I think Tennessee is going to be able to run. For as good as South Carolina has been defensively, the Gamecocks have struggled against opposing tailbacks. Tennessee has a pair of really good runners in Tiyon Evans and Jabari Small and I wouldn’t be surprised to see both come close to 100 yards this weekend. On the flip side, South Carolina has a handful of guys at receiver — Josh Vann, E.J. Jenkins and Jalen Brooks come to mind — who can cause some matchup problems. It’s a pretty good bet offensive coordinator Marcus Satterfield dials up a couple deep throws early to test the Tennessee secondary.
Score Prediction?
I think South Carolina could win, but I feel pretty confident about Tennessee’s offense finding points in a way I’m not ready to say USC can. I’m going with the Vols by a couple scores.
Tennessee 34, South Carolina 17