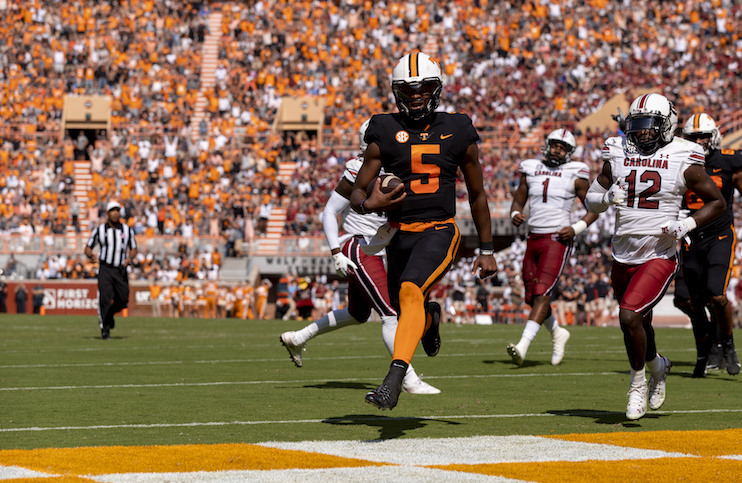 Derek Dooley’s second Tennessee team won an overtime thriller against Vanderbilt, only to lose to Kentucky for the first time in 26 years to miss a bowl game.

In 2016, Butch Jones had Tennessee football back, starting 5-0 with wins over Florida and Georgia only to go 3-4 down the stretch with horrible losses at South Carolina and Vanderbilt. 12 months later Jones was out of a job following the worst season in Tennessee football history.

Last week, Tennessee blitzkrieged Missouri in the best game the program had played in years. A matchup with a bad South Carolina team was next for Tennessee and a win would all but lock up bowl eligibility in Josh Heupel’s first season.

Tennessee was 10-point favorites over an offensively limited South Carolina team, but eight of the last nine games between the two teams had been decided by less than a touchdown. This was a test for Heupel and his program.

Don’t shoot yourself in the foot, don’t beat yourself and don’t let a hungry team with a first year head coach hang in the game late.

Tennessee put its foot on South Carolina’s neck from the jump, scoring 14 points before the Gamecocks crossed midfield. A pair of horrible South Carolina turnovers opened the door for the Vols to put this one away early.

Dressed in its ‘dark mode’ jerseys for the first time, Tennessee was ready for South Carolina’s funeral that began about the same time Hartsville, South Carolina native Tiyon Evans strolled 45-yards into the end zone to take a 35-0 lead.

“Great preparation, great focus, understand what you’re going to see from the other side of the football,” Heupel said of the Vols’ second straight fast start. “You see something different, being able to adjust— had to do that a week ago— and then executing.”

“Coming out locked in from the jump,” quarterback Hendon Hooker added postgame. “Great energy. We did a great job this week preparing. We were just really dialed in on the little things.”

Winning would have been one thing, but the way Heupel and his team did it was what was so impressive.

Jeremy Pruitt’s Tennessee program won eight games against Missouri, Vanderbilt, Kentucky and South Carolina but mistakes were frequent and those games usually ended with a Pruitt presser where he’d discuss how proud he was of his team’s fight but how they made it much harder than they needed to.

Tennessee wasn’t perfect Saturday. The Vols gave up a 44-yard fake punt for a touchdown, didn’t cross midfield in the third quarter and threw for just nine yards in the second half.

Both Hooker and safety Jaylen McCollough admitted that the Vols “relaxed” in the third quarter, but the game was never in jeopardy due to the Vols’ flawless start and ball protection. Since losing the turnover battle 3-0 against Pitt, Tennessee has turned it over just once and created nine takeaways.

A blowout win over a bad South Carolina team isn’t a crazy accomplishment or something that’s going to convince five-star recruits to come to Knoxville.

But after taking a nice step forward last week at Missouri, Tennessee collected itself and took another step forward Saturday. That means something.

Now the Vols will look to take another step forward next week— albeit a bigger one— when Lane Kiffin and the Ole Miss Rebels come to Neyland Stadium.