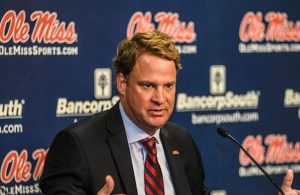 The Tennessee offense is clicking better than it has all season here at the midway mark. Since their loss to Florida, the Volunteers have scored 107 combined points in their last two contests. That’s almost half of the 215 total points that Tennessee put up in 10 games during the 2020 season. Overall, Tennessee’s offense has been rolling like a freight train lately, and Ole Miss head coach Lane Kiffin has taken note.

During his press conference on Monday, the former Tennessee head coach spoke about the Rebels’ upcoming trip to Knoxville. Additionally, Kiffin mentioned how tough a test they are expecting, both on and off the field.

“We have a lot of work to do, and we’re getting ready for a challenging place to play,” Kiffin said, according to Knox News. “It’s on schedule to be their first sellout in years, so it’s a very loud place, especially at night, and their team’s playing extremely well with two conference blowouts in a row, lighting up on offense. This is going to be extremely challenging.”

The first challenge that Kiffin pointed to was the impact of the fans in the crowd, which is something that Tennessee head coach Josh Heupel also spoke about on Monday. So it would seem, although, on opposite ends, both head coaches know exactly how much of a difference the Tennessee fans can make on Saturday night.

Heading into the game on Saturday night in Knoxville, both teams’ strengths have been their offenses. For Tennessee, Heupel has wholly redesigned and reshaped a stagnant offense from 2020. The Vols have 249 points through six games, which is good for sixth-most in the nation. However, even with Ole Miss having one less game played, the Rebels are close behind with 231 points.

“What we’ve seen for years at UCF,” Kiffin said when asked about what he has seen from Tennessee’s offense. “Run the ball really well with tempo, and then hitting big plays outside. We’ve seen it, we’ve lived it at FAU.”

In reality, both offenses are “extremely challenging,” to use Kiffin’s words. Out of all 14 SEC teams, Tennessee and Ole Miss are in the top four in total yards, yards per game, rushing yards per game, total plays, and total plays per game. In addition, the Vols are averaging 41.5 points per game; however, Ole Miss is putting up 46.2 per contest.

Towards the end of his press conference, Kiffin spoke about the feeling that goes into a return to Knoxville. However, Kiffin quickly spoke about that misconception, saying that a lot of those feelings happened during his first two visits with Alabama. Still, though, Kiffin is looking forward to being back in Tennessee.

“I said something in some article last week about houses where we lived, and they asked, ‘what was your favorite house and where you lived,’ and I said the house in Knoxville,” Kiffin explained during the press conference. “They said why and it was a great house and a great setup with the river, but the people. Really enjoyed the people there, still in contact with a number of them and will see some of them Saturday.”