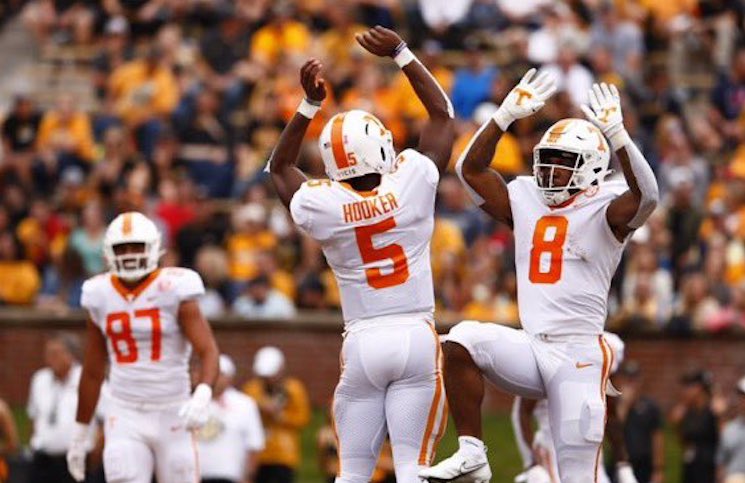 Tennessee’s offense has made a massive step forward this season, already surpassing the Vols’ 2020 point total six-games into the 2021 season.

The Vols’ offensive production has particularly skyrocketed the last two weeks as Tennessee scored 62 points against Missouri and 45 against South Carolina.

A main cause for the breakout has been the development of quarterback Hendon Hooker and the emergence of junior college transfer Tiyon Evans.

Both Tennessee’s starting quarterback and running back are playing high level football and are at, or near, the top of a plethora of SEC individual statistics.

Not playing the first five plus quarters of the season, Hooker ranks just 11th in the conference in passing yards. Still, the Virginia Tech transfer is near the top in most SEC passing statistics.

Hooker is first in the SEC with a 185.88 quarterback rating, second with a 69.6 completion percentage and fourth with 13 passing touchdowns. The 6-foot-4 senior also ranks third in yards per attempt and tied for the second least amount of interceptions

“Confidence, comfort, decision-making, taking care of the football, all that comes with some time on task inside of the offense,” Tennessee head coach Josh Heupel said of where Hooker is growing in the offense. “Whether it’s check and run-run, check and run-pass, whether it’s RPO [Run-Pass Option] game, whether it’s drop back, better decision making. The more time you have in it, the more comfort you have. The ability to handle and play within himself while we’re playing with tempo, all those things. He’s become a better, more vocal, more ownership on the football field and in the locker with our team as well.”

Evans has also missed time this season. The talented running back missed the whole Pitt game and most of the second half against South Carolina.

That hasn’t stopped the junior from raking up numbers this season, ranking fifth in the SEC with 486 rushing yards, tied for third with six rushing touchdowns and second with 6.7 yards per carry.

“The way he ran the ball, always making sure that he plays with a low pad level, and always making sure that he is locked and loaded and in tune to what is going on,” running backs coach Jerry Mack said of Evans. “I think the thing we take away from the game is, don’t ever play to the level of your competition no matter how good or how bad. I want to see the same Tiyon Evans every single week.”

Tennessee has had multiple backs impress and make plays this season. Despite injuries, Jabari Small is 23rd in the league in rushing yards. Hooker is 16th in the conference in rushing yards and ranks third amongst quarterbacks with 282 yards.

The dual threat quarterback is also sixth in the SEC in rushing touchdowns, third amongst quarterbacks.

Hooker, Evans and the rest of the Tennessee offense are looking to continue its recent success Saturday night against a porous Ole Miss defense.