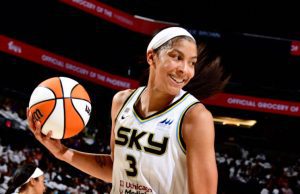 VFL Candace Parker during Game 1 of the WNBA Finals. Photo via @NBAonTNT on Twitter.

Two former Lady Vols, representing both the newer and older generations of Lady Vol basketball, will be on the court in Game 2 of the WNBA Finals tonight.

Candace Parker and Diamond DeShields both play for the Chicago Sky, who currently have a 1-0 lead over the Pheonix Mercury. Chicago took down Phoenix on the road to begin the series, which will be a best-of-five.

Before Game 2 tips off tonight in Phoenix, the WNBA dropped a video of VFL Candace Parker mic’d up during Game 1.

Tune in tonight at 9pm/ET on ESPN to see CP back in action 💥 pic.twitter.com/5K1cCFGoTW

During the Sky’s victory in the first game, both former Lady Vols did see time on the court. Parker was the Sky’s third-leading scorer with 16 points and also threw in eight rebounds. Additionally, DeShields did not record a bucket in the first game but did dish out two assists in 11 minutes of action.

Out of high school, DeShields originally enrolled at the University of North Carolina. However, she would then transfer to Tennessee shortly after but did have to sit out a year. DeShields ended up playing for the Lady Vols for two seasons and was an All-SEC first-team player in 2016-2017. During the 2018 WNBA draft, DeShields was taken by Chicago with the third overall selection. And just a couple of years later, she was joined by another Tennessee basketball legend, Candace Parker.

Parker, DeShields, and the Chicago Sky will look to extend their 1-0 lead in the WNBA Finals over the Phoenix Mercury tonight at 9:00 p.m. ET.