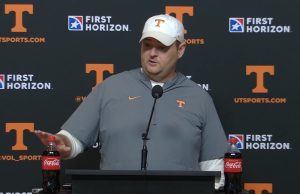 Tennessee head coach Josh Heupel knows how important this game will be for Tennessee. Not because of the opposing head coach, nor the sell-out crowd. In Heupel’s mind, this game is the most important simply because it is the next.

“This is the biggest game of the season because it’s the only game we play this week,” Heupel said on Thursday.

During his final press conference before Saturday night’s game, Heupel spoke about the environment around the game. Tennessee not only announced the return of Checker Neyland this week, but also the first sell-out crowd of the Josh Heupel era. Both of which, have not been present during a Tennessee football game since 2017.

Additionally, Heupel spoke about some of the philosophies and strategies heading into the game, as well as give some injuries updates.