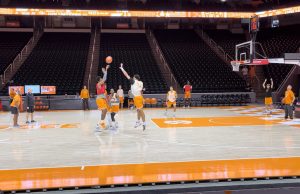 Footage from the Tennessee Basketball practice on Thursday, Oct. 14.

The new-look Tennessee Volunteers’ basketball team wasn’t practicing in their normal gym like usual on Thursday afternoon. No, instead, the team was under the lights in Thompson Boling-Arena.

The Vols have been hitting the practice court officially for about two weeks now as they prepare for the season opener on Saturday, Oct. 20.

As the Vols went through their warm-ups and conditioning drills, it was clear to see just how many new faces were on the court. From high school recruits like Kennedy Chandler and Brandon Huntley-Hatfield to an SEC transfer player like Justin Powell, or even the new assistant coaches running the drills, there are new faces everywhere.

Video recording was allowed during the practice, however, only during select portions at the beginning. In the video below, there is footage of the players going through basic drills, as well as 3-on-3 and 5-on-5 workouts as well.

Additionally, don’t miss RTI’s practice notes and observations from Thursday’s Tennessee basketball practice in TBA to get a full breakdown of what was seen during practice.