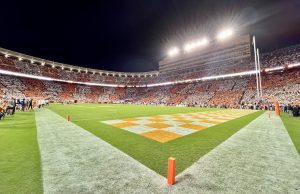 Saturday night’s game in Knoxville was notable for a variety of reasons. Tennessee lost to Ole Miss, but by the end of the night, it hardly felt like the most-talked-about story.

Instead, people were talking about the 20-minute chaotic delay towards the end of the game. People were sharing videos of Lane Kiffin making a one-handed catch on a water bottle thrown at him.

And yet, at the end of the night, Tennessee lost a one-possession game in Neyland Stadium’s first sellout since 2017.

After the game, RTI’s Ric Butler and Ryan Schumpert hit the field just moments after Josh Heupel’s press conference to discuss their thoughts on the game and everything that transpired. Ryan and Ric discuss the ending of the game, both on the field and in the stands. They also spoke about some of the injuries that were racking up throughout the night, as well as all the injuries that caused delays throughout the game. Of course, though, there were areas where Tennessee did have a good showing, and the guys were sure to hit on that as well.