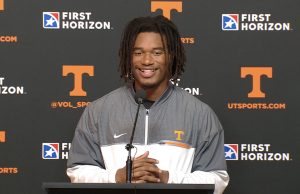 Some of the Tennessee players, including Velus Jones Jr, took the time to speak with the local media on Tuesday.

A few of the Tennessee players met with the media on Tuesday, as each gave some insight into their perspective of the Ole Miss game, while also talking about the preparation going into the Alabama game.

Defensive back Theo Jackson spoke about the mentorship aspects of the locker room, and how everyone in that unit is working to teach and learn from each other. Additionally, Jackson spoke about his perspective of the Ole Miss game, and the changes to the culture in the building.

Meanwhile Tennessee defensive end Byron Young spoke about his return to the field. Young, a transfer player this year, had to miss the first two games of the season due to eligibility. However, on Tuesday, Young spoke about getting back into “camp mode”, as he calls it. And, Young spoke about the importance of defensive line coach Rodney Garner, as well as the moment in the Missouri game when Garner helped kick him into gear.

Tennessee RB coach Jerry Mack and DB coach Willie Martinez also spoke to the media on Tuesday, which can be found here.

“I mean with me being the oldest, you know I’ve seen a lot,” Jackson said on Tuesday. “So, I just feel like I have to step up my game while also being there for the younger guys. With me, I’m usually like a quiet guy, but now I have to step into that leadership role of being the more vocal guy, being the guy who can lead by example while also correcting if anything’s going wrong. So, I feel like that’s a big part of it.”

“That was an experience that I never ever experienced before, even throughout recruiting, all the games that I’ve been to,” Jones Jr said. “I have never been in a type of environment (like that). So much love for our fans for showing up and showing out. I’ll be expecting the next home game to be the same, but there’s nothing like this university. There’s nothing like our fan base. They came and showed out, so that was amazing. I was shocked at the beginning of the game with all the lights and stuff like that. After that, it was time to lock in but that was beautiful. I even go back and look at pictures and stuff of it. We’re truly blessed to be at Tennessee playing for this program with our fan base. It’s amazing.”

“I feel like I just settled in,” Jones Jr said. “You know staring off I had two games off, I felt like kind of had me rested a little bit but now since you know I already got a few games under my belt, I feel like I’m back on that level at camp with the speed and everything. I feel like I adjust to the defense way better now.”