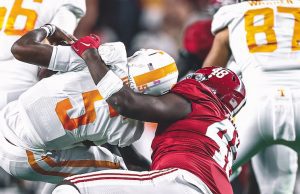 During the first quarter of Tennessee’s SEC game against Alabama on Saturday night, a play occurred in which Tennessee quarterback Hendon Hooker took a vicious hit from an Alabama defensive player near the sideline.

With just over seven minutes remaining in the opening quarter, Hooker scrambled out of the pocket and tossed the ball to Jabari Small streaking up the right sideline. Alabama linebacker Will Anderson was the initial player tracking down Hooker, tackling him from behind during the throw. However, at the same time, Alabama DB Malachi Moore also came screaming up the field, delivering a massive hit to Hooker in the upper torso and helmet area.

While Tennessee did complete the third-down play for a massive gain, there was surprisingly no flag on the play. Tennessee’s up-tempo offense kept the ball moving while many were left wondering about the previous play.

After the play, Terry McAulay, a veteran NFL referee of three Super Bowls and the Sunday Night Football rules analyst, gave his reaction to the call on Twitter. To make it simple, McAulay believes a targeting call should have been made.

“This was a foul for roughing the passer with targeting,” McAulay said on Twitter while referring to Hooker’s play. “The defender launches and makes forcible contact to the head of a defenseless player. Replay should have stopped the game and created the foul.”

When examining the play closer, McAulay’s analysis is correct. Moore not only makes forcible contact with a defenseless player, but he also does so while launching himself forward.

According to the official SEC website, targeting occurs when “a player takes aim at an opponent for purposes of attacking with forcible contact that goes beyond making a legal tackle or a legal block or playing the ball.”

Additionally, according to an NBC Sports article from Sept. 2021, “the NCAA targeting rule bans any forcible contact leading with the crown of the helmet or to the head or neck area of a defenseless player.”

Fourth-ranked Alabama took down Tennessee by a score of 52-24 on Saturday night in Tuscaloosa.