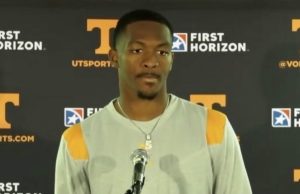 A few Tennessee players, including QB Hendon Hooker, spoke to the media following the game. Photo via Tennessee Athletics.

Even though it was a loss, ultimately, Saturday’s game against Alabama was still a step in the right direction for Tennessee. The Vols had 24 points, which was the most Tennessee has put up on the Tide since a 5OT game back in 2003.

The Vols are now sitting at 4-4 on the year, with a record of 2-3 in the SEC. However, after battling injuries to the starting lineup since the first week, the Vols will have their first bye week of the season coming up next as the team tries to get healthy.

After the Alabama game, three Tennessee players, along with head coach Josh Heupel, spoke to the media to give their reactions to the game. One of the main topics for each of the Tennessee players centered around the fourth quarter, and where Tennessee has to improve moving forward.

Butler was the only defensive player from Tennessee to speak with the media after the game. However, both QB Hendon Hooker and WR Cedric Tillman did give their perspective of the offense.

“There’s no moral victories,” Tillman said after the game.

The Vols will rest this weekend during their bye week, however, will be back on the field for Week 10 in a road game against Kentucky.