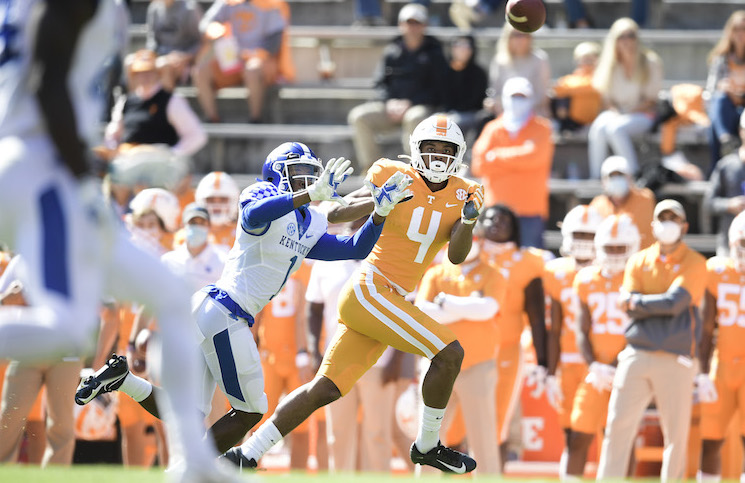 Tennessee and Kentucky’s week 10 matchup at Kroger Field in Lexington will kick off at 7:00 p.m. ET and ESPN2 will broadcast the game.

Josh Heupel’s first Tennessee team will travel to Lexington for a critical early November matchup. With a win, the Vols would be just one win shy of reaching bowl eligibility with matchups with South Alabama and Vanderbilt still on the schedule in November.

The matchup is the only game left on the regular-season schedule that wouldn’t be either an upset win or loss for Tennessee.

Kentucky is in the midst of one of its best seasons in program history. The No. 12 Wildcats are 6-1 (4-1 SEC) with their only loss coming to No. 1 Georgia. A strong November could put Kentucky in a New Years Six bowl game.

The Wildcats had a bye week this past week and travel to Starkville this week to face an improving Mississippi State team.

Tennessee will enter the matchup 4-4 (2-3 SEC) coming off back-to-back losses to Ole Miss and Alabama. A strong November could see the Vols earn a 7-5 record, tying Tennessee’s best regular-season mark since the 2016 season.

The Vols will be healthy and rested against Kentucky with their lone bye week coming the week before the game on Oct. 30.

That should allow Tennessee stars Tiyon Evans and Hendon Hooker to get fully healthy while allowing injured Vols Cade Mays, Theo Jackson, and Warren Burrell time to return to the field.

Tennessee is looking to exercise last season’s embarrassing 38-7 loss to Kentucky— the Wildcats’ first win at Neyland Stadium since 1984.