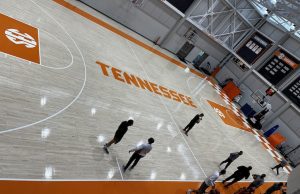 The Tennessee Volunteers’ basketball team hit the practice court on Tuesday after their Media Day. Photo by RTI/Ric Butler.

The Tennessee Volunteers’ basketball team hit the court on Tuesday afternoon as they continue to get ready for their first exhibition game of the season this Saturday.

However, Tuesday wasn’t just any ordinary day. Before the Vols’ practice, each Tennessee player and each assistant coach was made available for Tennessee’s Media Day.

During the interview portion, many of the players spoke about their off-season routines, getting back on the court, and their teammates. Additionally, some even answered some Halloween-related questions. Tennessee head coach Rick Barnes also had a press conference on Tuesday, where he praised the Tennessee leadership and the other head coaches at the school.

After the media day portion was over, the team hit the court. Tennessee’s team still features many new faces but is getting more and more familiar with each appearance.

Below are the highlights and footage from the Tennessee Basketball practice on SEC Media Day. In addition, practice notes and observations from Tuesday’s practice can be found here.