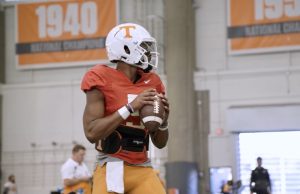 Without a game coming up this Saturday, the Tennessee football facility has been awfully quiet this week. On Tuesday night, the team hosted a Family Halloween Night, where players gave out candy to the children of staff and players.

However, once the family-friendly fun and games were over on Tuesday, the Vols went back to work on Wednesday. Tennessee had their first on-field practice of the bye week on Wednesday morning on the indoor field.

Zombie linebackers.
Unicorn princesses.
Superheroes and villains of all sizes.

The Vols are 4-4 on the year, with a record of 2-3 in conference play. Tennessee lost last Saturday in a gritty match-up against Alabama as the Vols put the Tide on notice for the first three-quarters of the game. However, Alabama was dominant in the fourth quarter, closing out Tennessee as the Vols’ gas tank hit empty.

During his press conference on Wednesday morning, Heupel spoke about how vital the bye week is for health reasons, especially for Tennessee right now.

“You guys know, I said it after the ball game too, important that we get a bunch of guys healthy here this week,” Heupel said on Wednesday. “That will be really important for us. And then, an opportunity for us to sharpen our skills and get better, too.” 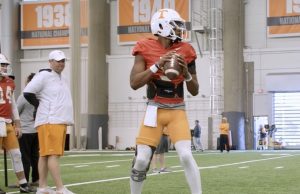 Balancing both getting better on the field and getting healthy off of it, Tennessee’s team ran through practice as they mix in workouts, meetings, and film sessions during the week. Tennessee QB Hendon Hooker did go through practice as usual, although, is still wearing his knee brace from the injury against Ole Miss.

It looks as though during his off time, Hooker will still be watching the sport of college football. Hooker’s younger brother, Alston Hooker, is a freshman quarterback at N.C. A&M. Hooker, No. 11, has not played through their first seven games of his first season. The Aggies are currently 3-4 on the year and third in the Big South.

Below are the highlights for the Tennessee football team’s practice on Wednesday morning during the bye week.