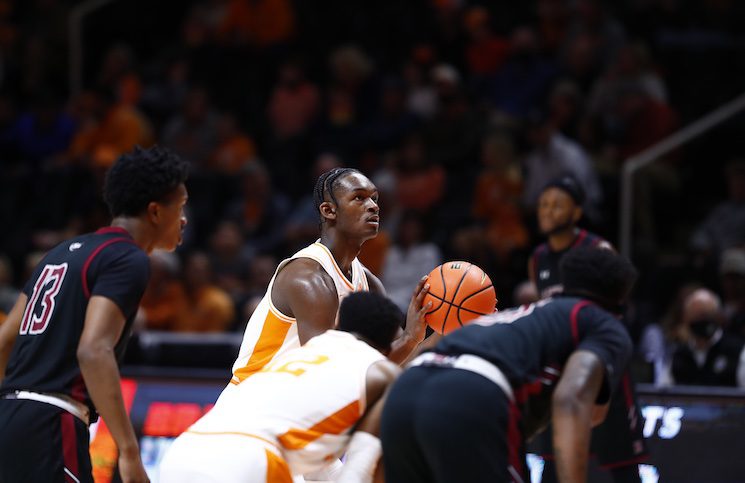 Tennessee basketball picked up a 103-62 exhibition win over Lenoir-Rhyne Saturday at Thompson-Boling Arena.

Chandler, who started at point guard for Tennessee, was fantastic against the Bears, scoring 21 points on eight-of-10 shooting. The five-star freshman made four-of-five three-point attempts while adding six assists and five rebounds.

Chandler impressed with his speed and playmaking ability in his Tennessee debut.

“Coach Barnes has been trying to help me out with the system,” Chandler said. I’m getting better every single day, knowing what he wants from the point guard and what he wants on the offensive end. Just finding my teammates open. The system is really great, and everyone is starting to buy in. Coach Barnes is always big on two feet away, and that makes a really big difference. The spacing of the offense is a really big key in the offense we run.”

Even with John Fulkerson out due to injury, Huntley-Hatfield came off the bench against Lenoir-Rhyne. The 6-foot-10 power forward scored 15 points on seven-of-10 shooting while adding 12 rebounds.

Huntley-Hatfield reaped the benefits of playing with Chandler Saturday. Postgame, the former five-star discussed his connection with the Vols’ point guard.

“I feel like it’s good, me and him communicate a lot while we are playing on the court,” Huntley-Hatfield said. “He’s an amazing point guard, even before coming here I saw him play a lot. I love the way he plays, a pass-first point guard, he’s really explosive. Really about staying up to pace with him, he’s really fast, that makes us play fast. I feel like chemistry is getting better, I feel like today was just the start and I’m really excited to see where he can take us.”

Transfer sophomore Justin Powell has four years of eligibility after playing in 11 games at Auburn a season ago.

Postgame, the Kentucky native discussed the Vols’ offense that took 46 threes Saturday and has taken 40 or more threes in two intrasquad scrimmages and a closed door scrimmage against Davidson.

“Our offense is definitely set for that,” Powell said. “All we have to do is run to our spots. We play well off each other, so we are always going to get the open look. We are going to be able to knock down the threes. It’s just a matter of running the court and knocking it down.”