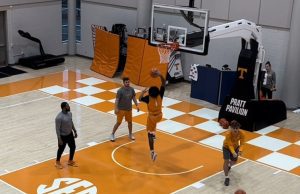 The Tennessee Volunteers’ basketball team during practice on Nov. 4, 2021. Photo by RTI.

With time winding down until the Tennessee Basketball regular season officially begins, the Vols are working hard to make their last adjustments before their opening game. Tennessee took down Lenoir-Rhyne in their first and only exhibition game last week and will host UT Martin in their opener on Tuesday, Nov. 9.

On Thursday afternoon, the Tennessee basketball team was back on the court to get another practice in.

Tennessee’s practices are high-energy and up-tempo as guys are flying in every direction of the court on most occasions. It’s also a very loud practice as head coach Rick Barnes continues to emphasize the importance of communication among the players.

First-team All-SEC selection John Fulkerson is still limited in practice after not participating in last week’s exhibition game. During Barnes’ press conference on Thursday, he described Fulkerson as “questionable” for Tennessee’s regular-season opener.

True freshman point guard Kennedy Chandler is continuing to zip around the court, showing his ability to direct the offense like an orchestral conductor. Additionally, Chandler had a great slam dunk towards the beginning of Tennessee’s warm-ups.

Below is the full highlight video for the Tennessee Volunteers’ basketball practice on Thursday afternoon.