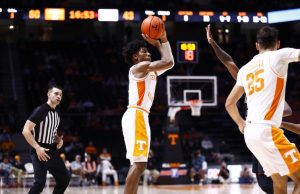 The Tennessee Volunteers are off to a strong start this fall after taking down Lenoir-Rhyne in an exhibition game on Saturday afternoon. Although the regular season won’t begin until Nov. 9, the Vols hit the court against the Bears, allowing multiple players to make their debut in a Tennessee uniform.

In a single word, Tennessee was consistently balanced against Lenoir-Rhyne. Tennessee won by a score of 103-62 while outscoring the Bears by 21 in the first half and 20 in the second half.

The Vols had many new faces make their Tennessee debut on Saturday. Former five-star recruits Kennedy Chandler and Brandon Huntley-Hatfield were on fire in their first game. Chandler wound up the Vols’ leading scorer in an electrifying performance, while Huntley-Hatfield put up a double-double in his first appearance in a Tennessee uniform. Meanwhile, Auburn transfer Justin Powell got off to a slow start in the first 20 minutes but really got hot in the second half. Powell finished with 15 points, 11 in the second half, with three made buckets from behind the arc.

In total, Chandler (21), Huntley-Hatfield (15), and Powell (14) were Tennessee’s three leading scorers on the night.

However, even with the new faces, Tennessee still had plenty of returners back on the court. Oliver Nkamhoua had 12 points while going 5-of-7 from the floor. Uros Plavsic finished with ten points, Josiah-Jordan James had nine, and Victor Bailey Jr had four. Meanwhile, Santiago Vescovi just couldn’t seem to find his stroke all afternoon, finishing with three points on 1-of-9 shooting.

However, as seen in the highlights below, the biggest takeaway from the game was the shot selection from the Tennessee basketball team. According to Will Warren on Twitter, out of the 78 shots that Tennessee took on Saturday afternoon, only six shots were two-pointers taken away from the rim. In other words, 72 of Tennessee’s 78 total shots were either a three-pointer or at the rim (dunks, layups, tip-ins).

Below are the full highlights from the Tennessee Basketball team’s 103-62 exhibition win over Lenoir-Rhyne on Saturday afternoon.

highlights from an exhibition win pic.twitter.com/E5JVv8tfbq