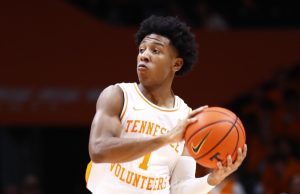 One of the most noticeable things about this year’s Tennessee basketball team is the speed on the court.

Freshmen Kennedy Chandler and Zakai Zeigler bring an electric burst to the point guard position. Santiago Vescovi looks quicker and more agile from his off-season training. Newcomer Brandon Huntley-Hatfield is adding a new combination of speed and strength down low. The list continues for returners and newcomers alike, which combines for an up-tempo pace of basketball.

However, possessing a high level of conditioning goes hand-in-hand with speed. Being the fastest player on the court isn’t going to be beneficial if the wind is out within a couple of possessions. Therefore, stressing the importance of conditioning, especially early in the season, is invaluable.

For Tennessee head coach Rick Barnes, though, there are two sides to conditioning. There’s the physical side, of course, but there’s also a mental aspect to it. As Tennessee continues to bring its newcomers up to speed, Barnes is preaching the importance of both sides to his team. Especially for players like Chandler and Huntley-Hatfield, Tennessee’s two former five-star recruits.

“Both [Huntley-Hatfield] and Kennedy [Chandler], they’re going to have to continue to really get themselves in elite shape to be the kind of players they want to be,” Barnes said after Tennessee’s exhibition win over Lenior-Rhyne.

Both Chandler and Huntley-Hatfield have hit the ground running, literally, since coming to Tennessee. In fact, they have been two of the hardest workers in the room, according to their coaches and teammates. But what Barnes is teaching his young players now is the mental side of the game and fighting through the battle of head fatigue.

“What that means is can they work harder? I’m not sure they can really work any harder than that,” Barnes said about Chandler and Huntley-Hatfield. “They have to get there mentally where they understand they can fight through it. That’s going to be the next step, when they think they’re tired, when I know that they have conditioned well enough not to be as tired mentally as they think they are. That will be the next step for both of those guys.” 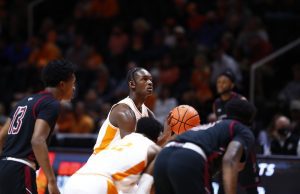 In Tennessee’s exhibition win last week against Lenior-Rhyne, Chandler and Huntley-Hatfield put on a show as the team’s two highest-scoring players. Although, both were admittingly a little winded after the game.

During Tennessee’s practice on Thursday, both Chandler and Huntley-Hatfield ran the 17-drill, with the entire team encouraging them as they ran. The drill has one player run the width of the court 17 times, counting out loud as they touch each sideline. The exercise was loud, energetic, and motivating as the team clapped and cheered for their teammates.

That’s just one of the many ways that Tennessee is putting an emphasis on its conditioning before the season starts. Like the Tennessee football team, a faster and quicker style of play could benefit this roster of players, considering all the talent that was added to the team. 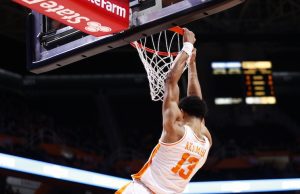 Before Thursday’s practice, junior forward Olivier Nkamhoua spoke about how valuable it is to play with such speedy guards at the point.

In Tennessee’s 108-64 win over Lenior-Rhyne, the Vols had 28 assists on their 40 made shots. Vescovi led the way with seven, and Chandler was close behind with six.

With the season rapidly approaching, Tennessee will continue to work on its overall physical and mental conditioning. One relies upon the other and only strengthens as the other does as well. And considering all that conditioning going into the season, the Tennessee team is sure to show off their speed early on.

Tennessee will host UT Martin on Tuesday, Nov. 9, at home in Knoxville. The game will tip-off at 7:00 p.m. ET.