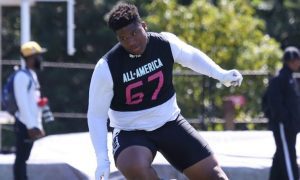 The second-ranked recruit in the nation, five-star defensive lineman Walter Nolen, officially announced his collegiate commitment over the weekend. In August, Nolen announced a top three of Tennessee, Texas A&M, and Georgia.

On Saturday afternoon, while on an unofficial visit to College Station, Nolen announced his commitment to Texas A&M through social media.

“Honored and blessed to say that I will be committing to Texas A&M,” Nolen wrote on his Twitter post. “#GigEm”

Nolen, the nation’s top defensive lineman recruit according to 247 Sports, is currently a resident of Powell, TN. Additionally, Nolen is in the midst of playing his senior season and first season at Powell High School.

Prior to Nolen’s commitment, Tennessee looked to be a strong contender for Nolen. The Vols were gaining momentum through defensive-line coach Rodney Garner as he and Nolen continued to grow their relationship.

Based on his traveling schedule in the month of October, it seemed to be down to a two-team race in the end: Tennessee and Texas A&M.

Then, as mentioned before, during an unofficial visit to Texas A&M on Nov. 6, Nolen made his commitment official.

According to 247, Nolen could still be planning on taking an official visit to Tennessee next weekend as the Vols host No. 1 Georgia. While Tennessee didn’t land Nolen during his commitment, nothing is official until National Signing Day. However, at this moment, Knoxville resident and No. 2 recruit in the nation, Walter Nolen, is officially heading to Texas A&M.