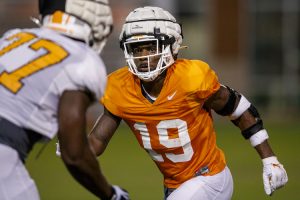 Less than 48 hours after Tennessee’s upset victory over No. 18 Kentucky, the Volunteers’ roster appears to be one spot smaller.

“With a heavy heart, serious consideration, and a long talk with my family, I would like to announce that I will be entering my name into the transfer portal to explore other opportunities,” Joseph said on Twitter on Monday.

Originally a four-star recruit in the class of 2020, Joseph committed to Tennessee in December of 2019. However, before his Tennessee commitment, Joseph was committed to Florida State but backed out 12 days before flipping to Tennessee.

As a recruit, Joseph had offers from many other SEC teams, such as Auburn, Florida, Arkansas, Georgia, Kentucky, LSU, Mississippi State, and Texas A&M.

This story will be updated as more information comes up.