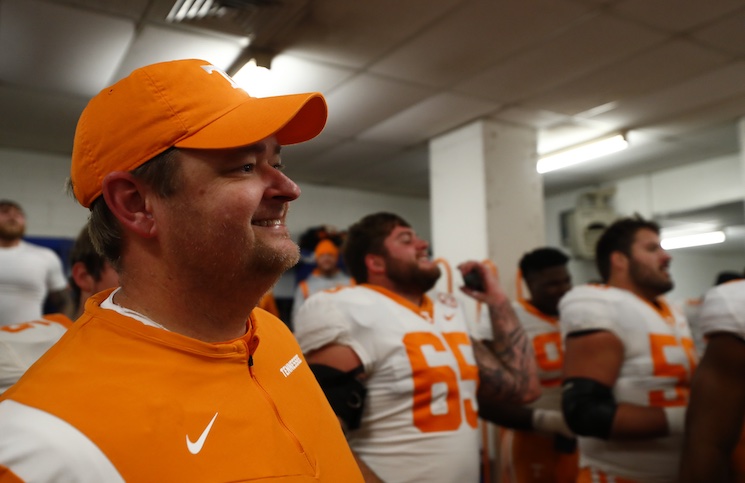 Josh Heupel spoke to the media Wednesday morning during his weekly appearance on the SEC Coaches Media Teleconference.

Here’s everything the Vols’ head coach had to say before Tennessee’s matchup with No. 1 Georgia.

Heupel opening statement: Our preparation has been really good. Guys are excited about this one, as they are every week, but it’s a special game with the rivalry that is Tennessee/Georgia and obviously Georgia’s football team is an exceptional team. For us, it’s a great challenge in all three phases of the game and one we’re looking forward to. I know it’s going to be a great environment inside Neyland Stadium Saturday afternoon. One we’re looking forward to being in.

How would you explain the crazy time of possession difference in Saturday’s win over Kentucky?

Heupel: I’ve never been a part of a game with that little time of possession and the success that we had. It’s just unique the way the game unfolded if you watch it. Our offense, we score on the first play of the game, maybe play four and play six we’re down at the 25-30-yard line and end up fumbling the ball. That’s really the midpoint of the second quarter there. It’s just unique. Kentucky was finding success in the run game and pounding it for threes and fours and converting on third down so the time of possession was swung in a really dramatic fashion. The game, if you look at it, the number of possessions for each team was not unique in that. I think we had 10 real possessions on offense before we took a knee with our 11th possession. It wasn’t a game with a lot of possessions either. Just a really unique game the way it unfolded.

What have analysts Alec Abeln and Mitch Militello meant for your team?

Heupel: For us, Mitch has been with me a longtime, dating back to being a student assistant and Alec, having played for me too, have a great understanding of the culture you’re trying to build within the program. Great competitors just in who they are and the energy they bring in the building every day. There ability to be cohesive with us is really important so two great young coaches.

What stands out about Georgia’s defense? How do you change your game plan when you play a defense as dominant as Georgia?

Heupel: Statistically, maybe as good as anybody that’s ever played the game, I mean s a unit. They always have good scheme. They’re well coached. They’re extremely talented and extremely deep. Their length and their speed is unique and tough and difficult to prepare for. For us, we’ve got to play really efficient. We have to have some balance in this football game. All three levels of their defense have elite players in it so you can’t hurt yourself. You have to take care of the football. If you look at how some games have unfolded, their defense has flipped the game in a span of two or three minutes. We have to do a great job of protecting the football then go out and make some plays too.

Where do you feel like your team has improved the most from Bowling Green to Kentucky?

Talk about Mike Ekeler and his unique personality on your coaching staff?

Heupel: Positive energy, real energy every single day, real with our kids, magnetic personality. He’s a great coach, a great teacher and a great recruiter too. A guy that I’ve known for an extremely long time and hasn’t changed in that manner at all. Has a great viewpoint of like every single day when he walks in the building.