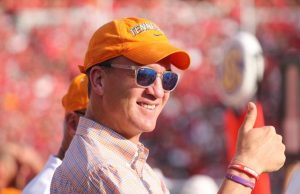 Tennessee football legend Peyton Manning will be back in Neyland Stadium this Saturday afternoon to see the Vols host No. 1 Georgia. However, during the week leading up to the game, Manning also had a message for the Bulldogs.

On Thursday, Manning joined “The Steam Room”, a podcast hosted by the NBA’s Ernie Johnson and Charles Barkley. As the three bounced around a few topics, Manning eventually brought up Tennessee and the upcoming game in Knoxville this weekend during a conversation about his many potential jobs since retiring.

“My name has been mentioned on some jobs that I am in no way qualified for by any means,” Manning said on the podcast with a chuckle. “Not possible. So it might be flattering in some ways, but it’s just not realistic, right? The University of Tennessee? We’ve got a great coach in Josh Heupel.”

Manning continued to build the excitement for the game with a message for the Bulldogs.

“I’m going to the game this weekend,” Manning said. “Georgia Bulldogs better lookout, the Tennessee Volunteers are on the rise!”

Manning was then cut-off by Barkley, a former Auburn basketball player.

“Peyton, are yall playing Georgia this weekend?” Barkley asked. “Let me tell you something. I saw that movie about a month ago… it’s not going to end well.”

“You’re probably right,” Manning responded while laughing. “But I’ll be there and cheering hard.”

Barkley is referring to Auburn’s home game against Georgia back on Oct. 9. At the time, the Bulldogs were ranked fourth in the nation and beat Auburn by a score of 34-10.

Peyton Manning has been everywhere lately. Manning threw the honorary first pitch at a Tennessee baseball game back in the late spring, has been hosting the Monday Night MegaCast with his brother Eli Manning, and even found time to be inducted into the Pro Football Hall of Fame’s 2021 class.

And now, with the Georgia Bulldogs coming into Knoxville during U.T.’s homecoming, Manning will be back in Neyland Stadium this weekend.

Tennessee will host Georgia this Saturday afternoon in Neyland Stadium at 3:30 p.m. ET. Additionally, CBS will have the broadcast on television.