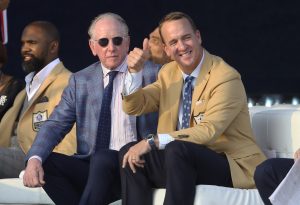 Peyton Manning and Archie Manning at the 2020/2021 Hall of Fame Induction Ceremony. Photo via @SInow on Twitter.

During the Pro Football Hall of Fame bust reveal and induction ceremony, Peyton Manning shared his thanks to the University of Tennessee and tipped his cap to the people of Tennessee in a touching speech.

“In college at my beloved alma mater, the University of Tennessee, football gave me a platform to help me grow as a man and refine my skills,” Manning said on Sunday night.

In 1994, Manning decided to attend the University of Tennessee rather than his dad’s alma mater, Ole Miss. But by the time that Manning left following the 1997 season, he finished his Tennessee career as the SEC’s all-time leader in passing. Moreover, Peyton Manning stayed at Tennessee all four years, which rarely happens today. Especially for so many top-ranked picks that declare early.

“Over the years, I’ve had the most unbelievable support from family, friends, fans, coaches, teammates, and support staffs,” Manning said in his speech. “And I just can’t say thank you enough to all of you that have come here tonight to help me celebrate.”

Towards the closing of his speech, Manning also acknowledged the fans and the people of Tennessee.

“If football has become my home,” Manning said during his Hall of Fame induction speech. “The people of the great states of Louisiana, Tennessee, Indiana, and Colorado have become my extended family.”

Peyton Manning hasn’t been a stranger to Tennessee since he left back in 1997. As recently as May, Manning threw out the first pitch in the Arkansas vs. Tennessee regular season baseball game. He also routinely attends Tennessee football games, both in Neyland Stadium and on the road.

Phillip Fulmer, Manning’s coach at Tennessee, was also in attendance in Canton for the ceremony. 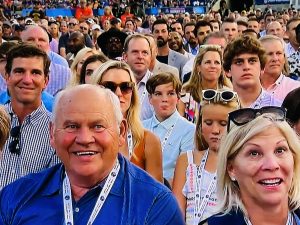 Manning’s personal section was filled with his family members and people involved in his career. In it were Manning’s wife Ashley, his children Marshall and Mosley, his brothers Eli and Cooper, former Tennessee coach Phillip Fulmer, Buccaneers quarterback Tom Brady, and others.

Manning’s father, Archie, was on the side of the stage for his son’s speech. Archie was the one to induct Manning officially and help with his bust reveal. He was also the one to officially present his son with the golden jacket on Friday evening.

Peyton Manning is the third Hall of Fame inductee from the University of Tennessee. He joined Doug Atkins (Class of 1982) and Reggie White (Class of 2006).

“I go in [the Hall of Fame] as a New Orleans native, as a University of Tennessee grad, Indianapolis Colt, and a Denver Bronco,” Manning said at a Hall of Fame roundtable over the weekend, according to Channel9 News. “I’m very proud of that.”

You can watch the entire Hall of Fame induction speech of Peyton Manning here.