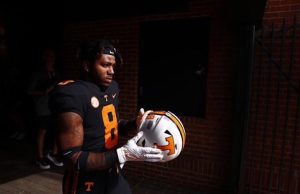 The Tennessee Volunteers will host the Georgia Bulldogs on Saturday in Knoxville as the University of Tennessee celebrates Homecoming weekend. After the Vols picked up the first ranked victory in the Josh Heupel era last week against Kentucky, Tennessee will attempt to do something no one else has been able to do this year: beat the Georgia Bulldogs.

The ‘Dawgs are undefeated on the year, and with a victory over Tennessee on Saturday, would complete an undefeated regular-season conference schedule. However, Tennessee will be fighting for 60 minutes as well, considering their next victory officially allows them to become bowl eligible at six wins.

In Knoxville, it will be strength-on-strength when it comes to Tennessee and Georgia. Tennessee’s revolutionized offense under Heupel and OC Alex Golesh has been one of the standout SEC storylines of the year. However, Georgia’s stout defense, which isn’t even giving up a full seven points to their opponent per game, is nasty.

On the flip side of the ball, Georgia’s offense is seemingly just as good. Or, at least their ability to score points is. According to the SEC’s Team Statistics, Georgia is second in the conference scoring 38.44 points per game, while Tennessee is just one spot behind the ‘Dawgs at 38.22. If you thought that it was just Georgia’s defense that carries them to victory, think again. The offense is talented, has playmakers scattered everywhere, and usually has plenty of opportunities thanks to Georgia’s suffocating defense.

To kick off the week a few days ago, Georgia head coach Kirby Smart spoke about how challenging of a task it is to replicate Tennessee’s offense in practices.

“Josh (Heupel) has done an incredible job, you can see it in the atmosphere at home games and the way their guys play, they have really bought into their system,” Smart said, according to USA Today’s UGA Wire. “Defensively they’re playing better and better, offensively in the last three or four games they’re averaging the most points in the SEC. They’re up tempo, fast paced and that’s really hard to prepare for. Everybody tries to prepare in the off-season, but it’s so hard to simulate when you talk to people going against it, it makes it tremendously tough. Our guys are excited for the opportunity, playing on the road in the SEC is one of the toughest things there is to do in the country, and we’ll get to go to a really tough environment and play football against these guys. Their quarterback is playing tremendously and their defense has gotten better and better each week.”

Meanwhile, Tennessee head coach Josh Heupel also spoke about Georgia during the week and was particularly complimentary of the Bulldogs’ defense.

“I’m not sure there is really anything that they don’t do really well,” Heupel said on Thursday. “Schematically, they understand what they’re doing defensively. They don’t bust. They have their eyes in the right spot. They tackle extremely well out in space. They have good cover guys. They’re big, long, physical upfront. I think they’re really unique in that they have 22-plus guys that are going to play on that side of the ball. They’re extremely deep. It’s a huge test for us. For us I think, big football game, you can get caught up in the emotion of the game. I think we have to play with a ton of passion and not get caught up in the emotion of it. We have to do the ordinary things at a really high level. And if we do that, then we’ll be ready to go compete at a high level too.”

Georgia leads the all-time series 25-23-3. Currently, Georgia is on a four-game winning streak against Tennessee.

* Indicates game was played at a neutral site.