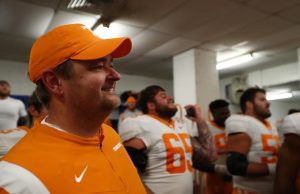 As he has done all season, Tennessee head coach Josh Heupel met with the media on Monday to open the Vols’ new week. After beating Kentucky and losing to Georgia in their last two games, the Vols are sitting at 5-5 on the year, one win away from bowl eligibility.

During his Monday press conference, Heupel ran through several topics pertaining to the Tennessee football team, starting with his closing thoughts on the Georgia game. Heupel did say that last week was the best week of preparation the team has had all year, which likely led to their 17-point showing against the Bulldogs, the most points that defense has let up all year.

Additionally, Heupel did turn the page to this week, though, speaking about the team’s work ethic on the practice field on Monday. He also spoke about the necessity to stay focused and prepared throughout the week.

Heupel was also asked about the NFL potential of Hendon Hooker, describing the typical decision-making process that he has with his players when the time does come.

With South Alabama and Vanderbilt as the last two opponents on Tennessee’s schedule, the Vols will have a great chance to finish the regular season at 7-5, becoming bowl eligible along the way.

Below is the full press conference for Tennessee head coach Josh Heupel to open the Vols’ South Alabama week.