Through ten games this season, the Tennessee fanbase has grown to see the strengths of Josh Heupel as a head coach in his first season. But for many of the players, it goes back much further than that. The relationships that Heupel and his staff have brought to the Tennessee program have made an impact both on and off the football field. And as one Tennessee player stated on Tuesday, coach Heupel is the type of guy that “you’d love to play for.”

The Vols are sitting at 5-5 through ten games, with two very winnable games remaining on the schedule. But looking back at what has transpired through the season, this Tennessee team has looked different than many other Volunteer teams before them. The team plays with confidence, with energy, and with high motors. All of which are traits that have been ingrained in them through their head coach.

“He’s instilled a lot of confidence into us,” Tennessee running back Jabari Small said on Tuesday. “You can tell by the way we play, the effort we play with, the way we compete. He’s just a coach that you’d love to play for. Whether it’s just putting away all the outside noise and just playing football, you know he’s just a great coach, and he instills a lot of confidence into us.”

The confidence aspect is something that Small mentioned twice in those four sentences. It’s easy to tell how truthful he is saying that, but it’s also been seen on the field this year.

In Tennessee’s game against Kentucky, when the Vols gave up the 4th and 24 to the Wildcats, it could have been a moment when the defense dropped their heads down in defeat. But through the confidence that Heupel has been instilling in his players since spring ball, the team overcame the setback and made the game-winning stop on the next set of downs. In fact, Kentucky didn’t gain a single yard over the next four plays. Ultimately, there are plenty of examples like that from the season on the field, but there are also plenty of quotes from Tennessee players that track along the same lines.

“He’s just been an energy-giver to us,” Vols’ defensive lineman Omari Thomas said about Heupel on Tuesday. “He’s just always high-energy every day. Positive. Always telling us we’re in a race against ourselves to be the best. He’s just always been there for us as a coach, and he’s always pushing us to be better every day.”

It isn’t just the players that have been complimentary of Heupel towards the end of his first season, though. It is also the coaches, the men who spend everyday planning and preparing to go to battle under Heupel’s leadership.

“I think Coach Heup does an outstanding job of communicating to us his expectations, the expectations of this program, what our goals are long term and short term, what it is he expects from us individually, collectively,” Tennessee defensive line coach Rodney Garner said on Tuesday. “I think he’s a really good leader. Obviously, he’s very competitive. I think that shows every day that we come into this building. He wants to win. It’s 1-0 every day. That’s how he approaches it, and that’s how he’s trying to program these young men to think. I think he’s done a remarkable job and look forward to where he’s going to take the program going forward.”

While the on-the-field actions and relationships can be seen every Saturday, there’s a whole other conversation happening away from the field between the players and the coaches.

At the end of the day, it doesn’t matter how many X’s and O’s a coach knows if the players don’t trust them. And for Tennessee’s coaching staff, building that trust and bond was their first priority and likely one of the most significant reasons for Tennessee’s early success in the Heupel Era. 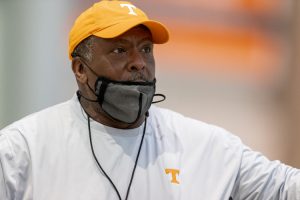 “Well, I just try to pour into these young men like I remember my coaches poured into me when I played,” Garner said during his press conference. “Being a poor kid from a small town in Alabama. I think the kids, they don’t care how much you know until they know how much you care.”

While it is just text on a page, Garner delivered that line with conviction and honesty, showing how much he believes in that concept. Garner continued to speak more about building those relationships.

“Obviously, with my coaching style, being as demanding as I try to be with them, they’ve got to know I care about them more than just on the field,” Garner said. “It’s a deeper commitment for them to allow me to push them and try to strain them to get the good stuff out of them. You know, it is personal. To me, it’s not a four-year relationship; it’s a lifetime relationship.”

Not knowing what it is like to play for Heupel, we’ll take Jabari Small at his word. Josh Heupel is a coach that “you’d love to play for.”