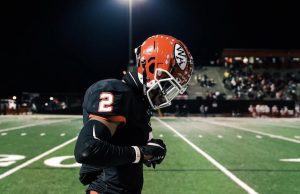 The Tennessee Volunteers are hot on the trail recruiting the son of a legendary former NFL star.

While the name of Christian Harrison may not be recognizable yet, his father certainly is. Rodney Harrison was a 15-year NFL veteran and four-time Super Bowl participant as a player. Harrison’s career was spent with the San Diego Chargers and New England Patriots, where the defensive back racked up two Super Bowl rings, two First-Team All-Pro selections, and two Pro Bowl appearances. Now, Harrison is an analyst for NBC’s “Football Night in America” broadcast.

Christian Harrison currently plays for Woodward Academy in Atlanta, GA. Standing at six feet tall and weighing in at 183 pounds, Harrison has a versatile combination of speed and strength that has caught the attention of many other programs.

Before listing his Top 3 on Nov. 17, Harrison collected 19 collegiate offers, including Florida and Missouri from the SEC.

In fact, Harrison was actually a Liberty commit back in July. At the time of his commitment to Liberty, Harrison was looking at offers from teams such as Mercer, Marshall, and Furman. However, once he started to receive some more prominent program offers in September, Harrison was quick to announce his de-commitment from Liberty in mid-October.

Following his initial commitment in July, Harrison took in offers from Tennessee, Kansas State, Georgia Tech, Florida, and Nebraska over the next few months.

Harrison was in Knoxville for an unofficial visit during the South Carolina game on Oct. 9. Tennessee not only won that game handily, but it was also the first time Tennessee debuted their dark-mode black uniforms. Four days later, on Oct. 13, Tennessee officially extended an offer to Harrison.

On the Big Orange side of the recruitment, defensive backs coach Willie Martinez and defensive coordinator Tim Banks have been the primary recruiters for Harrison’s services.

While Harrison did officially announce a Top-3 on Wednesday, he did say in the tweet that his recruitment was still open. So while the Tennessee Volunteers do look to be in a good position heading forward, the race isn’t over by any means. Harrison has not announced when he will make his final commitment.