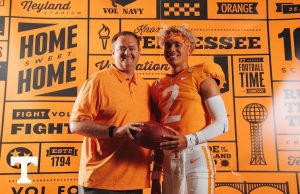 Future Tennessee quarterback Tayven Jackson doesn’t just know how to compete, no, he knows how to win.

On Friday night in Indiana, Tennessee commit and four-star quarterback Tayven Jackson led his team to a decisive 45-6 victory in the state semi-finals, securing a shot at the Indiana state championship next weekend.

Jackson’s run through the playoffs with Center Grove this year has been dominant. Jackson has led his team to a 35-7 win, a 41-7 win, a 29-19 win, and most recently, a 45-6 win in the semi-finals. In those four playoff games, Jackson has 434 yards on just 31 completions, averaging 14 yards per completion. Additionally, in the game on Friday night, Jackson showed off what he can do on the ground as well. During Center Grove’s win over Ben Davis high school in the semi-finals, Jackson had 104 rushing yards on eight attempts, including a 44-yard touchdown run in the third quarter.

Circling back to the point that led things off, Tayven Jackson is nothing but a winner on the football field. With an undefeated season currently intact, combined with a perfect season in 2020, Jackson has not lost a game in his high school career since Nov. 30, 2019, in the aforementioned state championship game as a sophomore. 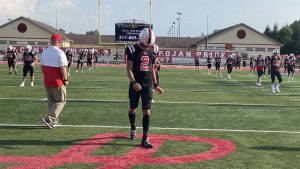 During Center Grove’s opening win in the playoffs on Oct. 29 against Franklin Central high school, Jackson made an unbelievable play through the air. Jackson sat back and launched a touchdown pass almost 50-yards in the pouring rain, dropping the ball right in the receiver’s hands.

Tayven Jackson, a four-star Tennessee commit from the class of 2022, is currently the second highest-ranked recruit in the Vols’ class.

Jackson officially made his commitment to Tennessee and head coach Josh Heupel back in April after taking in offers from Ole Miss, Texas A&M, Florida, and other prominent programs.

Last Saturday afternoon in Neyland Stadium, before the Vols hosted Georgia in an SEC East afternoon matchup, Jackson had the chance to meet up with Hall-of-Fame quarterback Peyton Manning.

Tennessee quarterback commit Tayven Jackson and Center Grove will shoot for their second straight Indiana state championship on Friday, Nov. 27 in Lucas Oil Stadium. The game will be a rematch of the 2020 state championship game, in which Jackson led his team to a 38-14 victory.