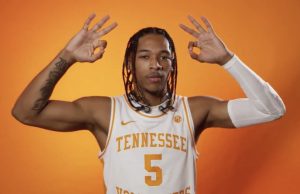 If the name wasn’t too familiar previously, it certainly is now. From his press conference interviews to his stellar play on the court, Tennessee freshman Zakai Zeigler was a star over the weekend.

As a recruit, Zeigler was the second-lowest rated player in Tennessee’s stacked class. But it wasn’t about the rating, nor the outside noise. Instead, it was the heart and toughness that head coach Rick Barnes knew Zeigler could bring to the table. After committing to Tennessee on the 27th of August, Zeigler is now helping lead the Vols to Top 25 wins early in the season.

While the play on the court certainly opened eyes towards Zeigler’s talent, his star-making weekend really started last Thursday.

Last Thursday, just before the Vols’ trip to Connecticut, Zeigler met with the media just moments before practice. Barnes had an interview before Zeigler, but then came running back onto the scene, throwing a curveball into Zeigler’s interview.

“Excuse me, I forgot to lower this microphone when I left,” Barnes said as he and Zeigler laughed in unison. “Is it down low enough?”

“Good one,” Zeigler chimed back as Barnes went in for the hug. “You got jokes!”

In the quick interaction, it’s impossible to miss the heartfelt and genuine connection between Barnes and his players. The media in attendance couldn’t help but burst into laughter as Zeigler’s personality shined through.

“He’s hilarious,” Zeigler said about Barnes with a grin. “He’s got jokes all the time.”

According to Zakai Zeigler, Rick Barnes has "jokes all the time". Here is Barnes interrupting his press conference. #Vols pic.twitter.com/lkt4FhQKdJ

If Tennessee’s arrival to Connecticut showed one thing, it was that most of these Tennessee players aren’t used to the November cold of the northeast.

Except for Zeigler, that is. Zeigler, a native of The Bronx, grew up in the New York area. Therefore heading north to Connecticut was a simple as heading back to the somewhat-familiar territory.

As seen later in the weekend, the trip to the northeast opened the opportunity for Zeigler to play in front of his family and many of his friends. Uncasville, CT, where the tournament was held, is only about 120 miles from The Bronx.

Saturday – A Game to Learn From

Tennessee’s opening contest against Villanova didn’t go the Vols way, but it did give them plenty of takeaways to learn from. Ultimately, the entire team struggled on the offensive end of the court while playing from behind for the entirety of the game. Zeigler only had seven minutes of action on the court but did record seven points on the scoreboard. Zeigler’s seven points, surprisingly enough, were the second-most on the team in the game. Even more impressive is that eight Tennessee players had more minutes than the New York freshman.

With a dynamic performance in the loss to the Wildcats, Zeigler was all set to shine in the third-place game on Sunday.

See also from RTI: Meet Kennedy Chandler and Zakai Zeigler: Tennessee’s Point Guards Getting the Best Out of Each Other

After scoring the second-most points in the game on Saturday, Zeigler was Tennessee’s leading scorer against No. 18 North Carolina on Sunday. That’s right, even with five-star freshmen and talented veterans on the roster, the five-foot-eight freshman outscored every one of them.

Zeigler finished the game with 18 points and was the second-leader scorer between both teams. Zeigler was 7-of-10 from the field, 3-of-5 from behind the arc, and even threw in five beautiful assists to cap off his night.

Arguably the most memorable of Zeigler’s assists was his lob to Olivier Nkamhoua in the second half. While moving from his left to right across the top of the key, Zeigler threw a picture-perfect pass to Nkamhoua, who was streaking down the baseline. Nkamhoua caught the pass and delivered the slam, sending the Tennessee bench into a frenzy.

As mentioned previously, Zeigler was a scoring machine with the ball in his hands. While half of his points came from three-point range, he also displayed his speed and shiftiness when driving to the basket. On several occasions in the game, Zeigler blew past his defender en route to the basket, controlling his body and scoring the bucket. Zeigler often drew the help defender on his drives to the hoop, but it didn’t matter much.

Zeigler’s speed was, plainly put, too much for the Tar Heels to handle.

MOUSE IN THE HOUSE.

Sunday – After the Whistle

“It was really special,” Zeigler said about his performance during the postgame interview on Sunday. “I had a lot of people here, a lot of friends watching the game, so it did mean a lot to me.”

If Tennessee’s locker room celebration told any kind of story, it was how much Zeigler means to his team. The Tennessee players were screaming, jumping up and down, and splashing the New Yorker with water and Gatorade as the whole locker room burst into a celebration.

After the game, the Knoxville News Sentinel’s Mike Wilson captured a touching moment on the court after the fans had left the stands. There was Zeigler, surrounded by his friends and family who made the trip to see him, soaking in the last few moments in the arena.

Zakai Zeigler, the man of the hour and day, had a lot of family and friends on hand in Connecticut.

He made the trip from Long Island worth it for them. pic.twitter.com/4F4dbHDVGJ

Zakai Zeigler’s performance over the weekend was phenomenal; especially on the court. In the first game, he was Tennessee’s second-leading scorer while playing the ninth-most minutes on the team. And on Sunday, Zeigler took things one step further, ending as the Vols’ leading scorer in the win over North Carolina.

But at the end of the day, Zeigler’s star-making weekend went beyond the lines on the court. Zeigler let his personality shine through as his head coach crashed his interview on Thursday, and reminded us that even in the midst of a competitive atmosphere, family is still the most important thing.

And there’s no question about it, Zakai Zeigler is a terrific addition to the Tennessee basketball family.