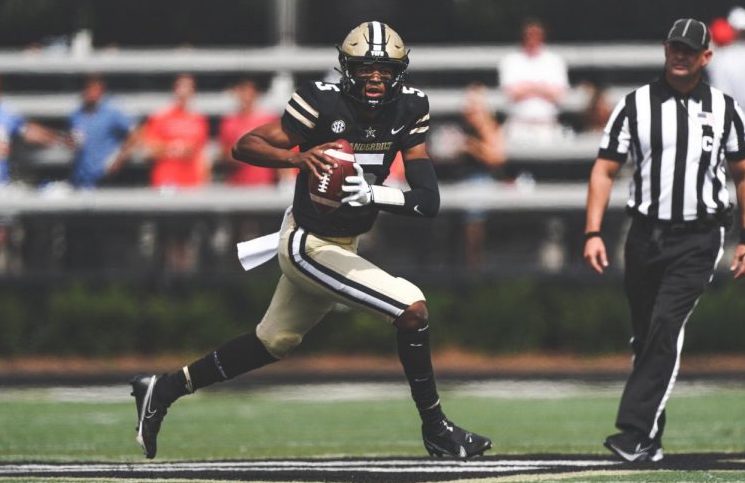 Question: Obviously the expectations were low for Vanderbilt this season, how would you assess Clark Lea’s first season?

Gerson: There’s been some good and some not as good. I think Lea’s found a defensive scheme that works for this group given its lack of speed. Vanderbilt has played with a lot of discipline. The offense has been more up-and-down but I think his decision to start Mike Wright against Tennessee is a step in the right direction. Ultimately this is a situation where we’ll have a better idea of where this is truly headed in a few years.

Q: Vanderbilt finally made the move at quarterback from Ken Seals to Mike Wright last week. How has he performed in his action this season?

Gerson: In the box score, he looks similar to Seals, but there are some additional things he can do that add to the offense. Wright isn’t very efficient but he has big play potential both with his arm and his legs. He’s good at scrambling and extending plays. Wright is generally less turnover-prone than Seals. Players and coaches love the energy he brings as well.

Q: Vanderbilt has played Ole Miss and South Carolina competitively this season. What has been different for the Commodores in those two games?

Gerson: Defensively, Vanderbilt plays a high-risk, high-reward scheme that is heavy on pressure and focuses on turnovers. If the blitzes don’t get home, that can lead to some disastrous results. But when that defense is successful, it takes away possessions by generating interceptions and third-and-longs. Vanderbilt has also been pretty good at getting red-zone and third down stops, ranking in the top 50 nationwide and the top five in the SEC in both third down and red zone defense. Offensively, it’s when the team plays disciplined, avoids penalties and can generate a few big plays. Clark Lea opted to go for it fourth down five times against Ole Miss, converting three, which helped to extend drives.

Q: What’s an area you feel like Tennessee can exploit against Vanderbilt?

Gerson: Vanderbilt has struggled all season long in giving up big plays and that’s a strength of Tennessee’s offense. If the Vols air it out downfield, Vanderbilt doesn’t always have the speed to keep up with SEC receivers. On defense, the Commodores often have drives stall out. A lot of teams have put Vanderbilt behind from the start by forcing field goals. Vanderbilt’s kick coverage has also been poor, so teams with good return teams have tried to exploit that in the field position game.

Q: What’s an area you feel like Vanderbilt can either hold its own or excel in against Tennessee?

Gerson: Turnovers are the obvious one. Vanderbilt is second in the SEC in interceptions and while Tennessee is not exceptionally turnover-prone, the Commodores have intercepted at least one pass in every SEC game so far. Vanderbilt also doesn’t commit a lot of penalties, so expect the Commodores to take advantage if the Vols give yards away there.