Cutcliffe spent a total of 19 years at Tennessee as an assistant, although, broken up into different stretches.

Tennessee gave Cutcliffe his first job at the collegiate level in 1982 as an assistant. However, Cutcliffe quickly climbed the ranks, becoming the Vols’ tight ends coach from 1983 to 1988. Cutcliffe then spent one year as the Vols’ running backs coach in 1989, before becoming the quarterback’s coach at Tennessee from 1990 to 1991.

After his two-year run as the QB’s coach at Tennessee, Cutcliffe then became the Vols’ passing game coordinator in addition to his role with the quarterbacks. However, in hindsight, it’s clear to tell that was just the beginning for Cutcliffe.

In 1993 and 1994, Cutcliffe became the offensive coordinator for Tennessee, while still fulfilling his role as the quarterback’s coach. Then, from 1995 to 1998, Cutcliffe added another title to his ongoing list, becoming the assistant head coach for Phil Fulmer. 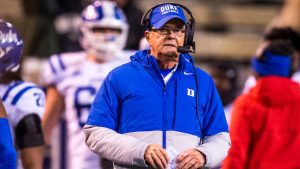 Cutcliffe’s success at Tennessee gave his name a significant amount of weight around the country, and specifically, inside of the conference. In December of 1998, Cutcliffe began his head coaching career at Ole Miss, which lasted until 2004. After a year away from football in 2005, Cutcliffe made his return to Rocky Top, serving as the Vols’ assistant head coach, offensive coordinator, and quarterback’s coach in 2007.

In 2008, Cutcliffe began his coaching career at Duke, which carried all the way to his separation from the team on Sunday.

Cutcliffe’s Tennessee resume and track record are legendary, to say the least. While he was the offensive coordinator for Tennessee, Cutcliffe helped lead the team to two SEC championships and the National Championship in 1998.

In addition, Cutcliffe was incredibly impactful on Tennessee quarterback Peyton Manning, helping groom the quarterback into one of the most successful individual Tennessee players of all time.

Aside from Manning, Cutcliffe has coached a number of former quarterbacks that went on to play in the National Football League. Cutcliffe coached Heath Shuler, Peyton Manning, Tee Martin, and Erik Ainge while at Tennessee. The former Ole Miss head coach also sent Eli Manning to the NFL while in Oxford, and three more Duke quarterbacks while serving as the head coach of the Blue Devils.

With the connections between Tennessee and Cutcliffe, it could make sense to try to bring him back to Tennessee under the direction of head coach Josh Heupel. Cutcliffe has notable ties to the Manning family, and while it is a longshot, could have an impact on the recruiting of top overall recruit Arch Manning in 2023. At a minimum, Tennessee could welcome back Cutcliffe as an offensive analyst to the team.