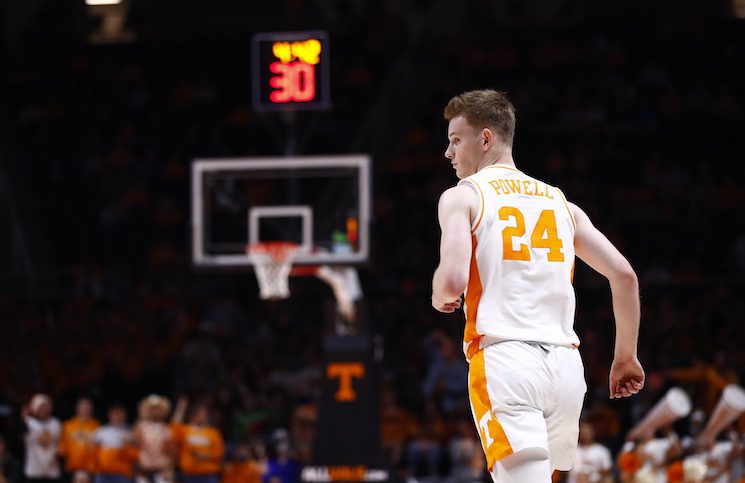 Tennessee handled Presbyterian with ease Tuesday night at Thompson Boling-Arena, doubling the Blue Hose up in the first half before coasting to a 86-44 win.

No Sluggish Start For Tennessee

In Tennessee’s Black Friday matchup with Tennessee Tech, the Vols were sluggish. The Golden Eagles were in the game for 30 minutes and even led Tennessee at halftime and early in the second half.

Rick Barnes’ seventh team came out with a different energy Tuesday night and it allowed Tennessee to open up a 45-21 halftime lead.

Presbyterian took a two-point lead just over five minutes into the game and the Vols dominated from there, going on a 15-0 run in the next 4:14 and winning the rest of the half 37-11.

Strong play from Kennedy Chandler was crucial for the Vols as was red-hot three-point shooting (more on that below). However, it was Tennessee’s defense revving it up that led to a dominant second half.

The Blue Hose made challenging mid range jump shots early and it unsurprisingly wasn’t sustainable. Presbyterian shot just 38% from the field in the first half and struggled to get to the free throw line, missing their only two attempts in the half.

Tennessee’s defensive intensity gave Presbyterian problems as they turned it over 12 times in the first half, leading to 20 Tennessee points.

The second half was much of the same as Tennessee led by as many as 43 points before finishing with a 42-point victory.

As well as playing lights out defense, Tennessee’s three-point shooting was a major reason it opened up a massive first half lead.

The Vols shot a staggering nine-of-14 from three-point range as five Tennessee players made triples and both Justin Powell and Victor Bailey Jr. made three.

Unsurprisingly, Tennessee struggled from deep coming out of the locker room and missed its first seven attempts of the half. The Vols picked it back up from there though to finish the game 14-of-27 (52%) from three-point range.

The number of three-pointers Tennessee took in its scrimmages, exhibitions and the season opener against UT-Martin didn’t prove to be an accurate summation of this team. However, we’ve seen the Vols get into a rhythm of shooting 20-25 triples a game.

Tonight showed what that number can be — and how explosive Tennessee’s offense can be — when the shots are falling.

And welcome back to Justin Powell. The Auburn transfer’s shot struggled in the Hall of Fame Tip-Off and he missed the Tennessee Tech game with the flu.

Powell showed no signs of rust Tuesday, making all five of his three-point attempts on his way to a 15-point, five rebound and five assist performance.

Blue Hose Turn It Over At Massive Rate

Presbyterian’s turnover issues carried into the second half Tuesday as the Blue Hose (what a nickname) totaled 25 turnovers and posted a massive 40.3% turnover rate.

You don’t turn it over on 40% of your possessions without having major work to do on yourself. However, give Tennessee credit for making things difficult for Presbyterian.

Kennedy Chandler — who Rick Barnes has insisted can be an elite defender with buy in — tied the UT school record with seven steals in the game. As a team, Tennessee recorded 13 steals.

Under Barnes and “defensive coordinator” Mike Schwartz, Tennessee hasn’t been known for taking risk and recording steals on defense. However, this Tennessee team has had an abundance of success creating steals.

The lack of a true shot blocker is almost potentially leading to more risk taking and more steals, but this is a storyline I will be watching the rest of the season.

Tennessee did an outstanding job of capitalizing on the turnovers against the Blue Hose, scoring 33 points off turnovers.