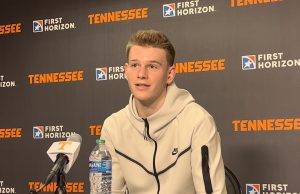 While it may have taken the Vols a few minutes to get the engine started, Tennessee played a dominant game on Tuesday night, leading to a commanding win against Presbyterian. The Vols defeated the Blue Hose by a score of 86-44.

The big story of the game for Tennessee was the improved shooting from behind the three-point line. Last week against Tennessee Tech, the Vols struggled significantly to get their shot going from deep. However, on Tuesday night in Knoxville, that didn’t seem to be an issue.

Tennessee finished the game shooting 14-of-27 from three-point land. Justin Powell was tremendous in that department on Tuesday, closing the game 5-of-5 from deep

After a few gimme games in Knoxville, Tennessee will head out on the road for their next two. The Vols will take on Colorado in a true road game this upcoming Saturday, followed by a matchup with Texas Tech in New York City’s Madison Square Garden on Tuesday, Dec. 7 in the Jimmy V Classic.

Below are the full interviews for Tennessee guard Kennedy Chandler and guard Justin Powell.