It is official. The Tennessee Volunteers will head over to Nashville at the end of this month to take on Purdue (8-4) in the Music City Bowl. With all the information surfacing around the same time on Sunday afternoon, here is a look at some of the social media buzz around the game. The talk on Twitter, at least initially, has mainly focused on statements from both programs, ticket prices, and betting odds.

Here is a look at some of the fascinating content that hit the web on Sunday and Monday following the Music City Bowl announcement. 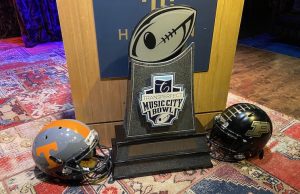 The Tennessee Volunteers will take on Purdue in the 2021 Music City Bowl. Photo via @MusicCityBowl on Twitter.

The Tennessee Volunteers will be playing in their 54th all-time bowl appearance this December, which ranks fifth in all-time program bowl appearances across the country.

Tennessee wide receiver JaVonta Payton sent a tweet following the initial news that seemed to represent some disappointment in the location of the Vols’ bowl game.

However, after some clarification, the disappointment seems to stem from the idea that Payton was hoping for a new location and new experience. While a member of the Mississippi State football team, Payton and the Bulldogs did wind up in the Music City Bowl to close the 2019 season. Mississippi State was taken down by Louisville by a score of 38-28.

Additionally, Purdue head coach Jeff Brohm also sent out a statement regarding the Boilermakers’ spot in the 2021 Music City Bowl.

“Playing in a game like the Music City Bowl, in the great city of Nashville, is a reward for our team after the season we had,” said head coach Jeff Brohm. “We are excited about the opportunity to compete, especially in an NFL stadium against a very good Tennessee team. Our guys are looking forward to the challenge, and we can’t wait to see our fans join us in the Music City.”

According to Outkick’s Trey Wallace, the Music City Bowl prices are near the middle of the pack as of Sunday, Dec. 5. The prices for tickets in Nashville aren’t as high as games on New Years Day, but they are a good chunk higher than other mid-tier bowls, such as the Gasparilla and the Texas Bowls.

Early on, but here’s a look at ticket prices for some of the bowl games that SEC teams are participating in, via @StubHub

104.5 The Zone radio host Buck Reising sent out a poll on Monday in which fans could express how happy they are with the Music City Bowl bid. At the time of this publication, after 306 votes, 74.5 percent of respondents have voted “Yes”.

#Vols fans, are you happy with a Music City Bowl bid? @1045TheZone

After the initial announcement was released, Purdue was the original favorite in the game. Although it wasn’t a big line between the teams, there has been significant movement since then. Now, across most betting sites, Tennessee is actually the slight favorite in the game as of Monday, Dec. 6.

Purdue opened yesterday as 3-point favorites over Tennessee in the Music City Bowl.

Bettors overnight moved that SIX POINTS to Tennessee now being favored by 3.

In their last meeting–Purdue beat Tennessee in the Bluebonnet Bowl, 27-22. https://t.co/0izP2XnfqE