While there is still a lot of basketball to go in the 2021-2022 season, some eyes have already been turning to the NBA Draft in July. In the 2021 NBA Draft, Tennessee had two first-round draft selections with Keon Johnson at No. 21 and Jaden Springer at No. 28.

And according to an NBA mock draft from Yahoo Sports, that first-round streak looks to be continuing for the Tennessee Volunteers.

The latest NBA mock draft from Yahoo has Tennessee guard Kennedy Chandler being drafted by the Dallas Mavericks with the No. 15 pick. 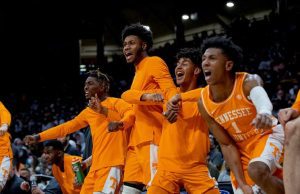 Currently, the fifteenth pick is the first selection outside of the lottery range. And judging by Chandler’s placement, it seems as though the freshman from Memphis is a fringe lottery pick as things stand currently.

In this mock draft, Chandler is projected as the fourth SEC player to be taken off the board. Yahoo Sports has Auburn’s Jabari Smith at No. 2, Kentucky’s TyTy Washington at No. 11, and Alabama’s J.D. Davison at No. 14.

Through the first ten games of the season, Tennessee’s Chandler is averaging 14.6 points per game in 29.4 minutes per contest. Chandler is leading Tennessee in points per game, slightly above Santiago Vescovi’s 13.1 PPG. Additionally, Chandler’s 5.4 assists per game lead the Volunteers’ team as well.

Chandler, originally a five-star guard from Memphis, has been dynamite in his first season at Tennessee. The starting point guard for the Vols has brought a new level of athleticism and playmaking to the Tennessee squad. Not to mention, Chandler has elevated the guards around him. Tennessee guard Santiago Vescovi is averaging the most points of his career this season, showing how effective he is with a true point guard leading the offense.