What Does Alabama Have to Do to Bounce Back from Loss?

With two SEC teams in the National Championship game, it was expected that there would be some kind of Tennessee tie during the game. As things ended up, there were two Tennessee references throughout the game, although, one sparked a little more conversation than the other.

Throughout Monday evening, legendary Tennessee running back Alvin Kamara was seen on the Alabama sideline during the game. Kamara was with a large Alabama alumni group, which featured NFL stars such as Mark Ingram, DeAndre Swift, Trevon Diggs, and others. 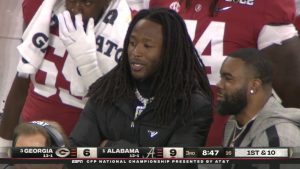 In August, Tennessee elevated Kamara to iconic status after putting his picture as one of the three on the back of the Neyland Stadium jumbotron. However, as many pointed out during the game on Monday, Kamara’s presence on the Alabama sideline isn’t just out of nowhere.

Fresh out of high school, Kamara’s collegiate journey originally began at the University of Alabama. Kamara’s Alabama career never got off the ground, though, as injuries and a suspension kept him off the field in his first year. Then, Karama wound up transferring to Hutchinson Community College, which was the last stop before he made it back to the SEC with Tennessee.

The other fascinating Tennessee alumni at the game was none other than Hall of Fame quarterback Peyton Manning. It wasn’t a surprise to see Manning at the game considering his successful partnership with ESPN and his passion for SEC college football. Plus, perhaps the biggest connection, the game was held in Lucas Oil Stadium – home of the Indianapolis Colts.

We have a Peyton Manning sighting at the #NationalChampionship pic.twitter.com/RnZoYORA9r