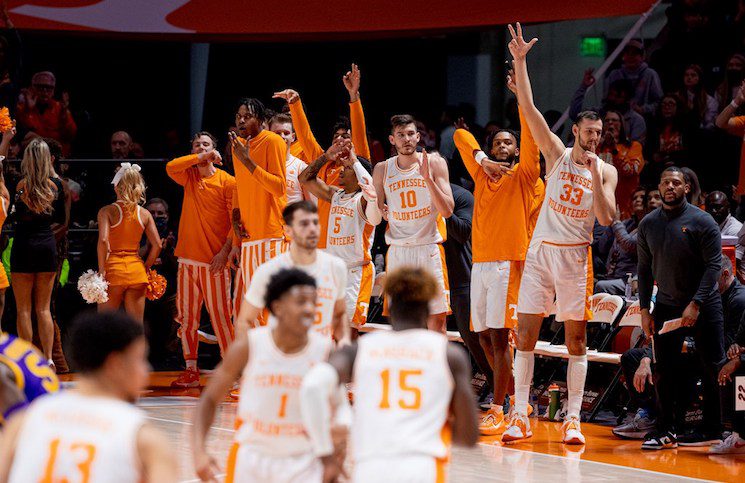 After each week of the season that Tennessee plays at least two games, “The Starting Five” on Monday will analyze the previous week of play from the Big Orange while highlighting questions Tennessee is facing in the coming weeks in five subheadings.

Tennessee turned in its first 2-0 week of the conference season, earning a hard fought win at Vanderbilt before thrashing LSU by 14 at Thompson-Boling Arena.

Now, on to the starting five.

Plavsic Steps Up Into Starter Role

Tennessee head coach Rick Barnes vowed to mix things up following the Vols blowout loss at Kentucky. He did that on Tuesday, pulling veteran John Fulkerson out of his starting lineup for junior center Uros Plavsic.

Plavsic stepped up and rewarded Barnes for that decision, playing the best week of basketball of his Tennessee career.

The 7-foot junior was by far the Vols’ best big man last week and was one of Tennessee’s best players. Plavsic tallied 13 points and seven rebounds at Vanderbilt before recording 12 points and six rebounds in the win over LSU. The center missed just three shots on the week, playing efficient basketball.

Not only did Plavsic bring strong play, but he brought a toughness and fight that the Vols desperately needed.

Plavsic continues to play better-and-better as the season develops and has been Tennessee’s best big man in conference play. In seven SEC games, Plavsic is averaging 7.3 points and 5.4 rebounds per game and has scored in double digits three times.

Whether the big man can turn the good week into his consistent performance will be interesting, but Plavsic’s progression has been a great and surprising development.

Tennessee Leans On Its Defense

In Tennessee’s two previous losses entering the week, the Vols’ defense wasn’t like their normal self — especially in the 28-point loss at Kentucky.

The Vols’ defense got back to their ways this week, carrying the load in both wins.

Against Vanderbilt, Tennessee forced 21 turnovers including 14 steals. The Vols’ backcourt that got torched by the Wildcats’ talented guards, put on a defensive display in Nashville. Kennedy Chandler recorded five steals and Zakai Zeigler added four while proving to be a gnat on Vandy star Scotty Pippen Jr.

The Vols continued that lockdown defense in the home matchup against LSU, holding the Tigers to their lowest offensive output of the season.

While the defensive success was driven by forcing turnovers at Vanderbilt, against LSU the Vols forced the Tigers into difficult shots and limited their stars.

It was the Tennessee defense that we’ve become used to seeing the last two seasons, but nonetheless a big bounce back for the unit. The last three weeks have been a reminder that if Tennessee’s defense falters they have little chance to beat good opponents on the road and will have to battle with everyone.

If Tennessee keeps playing defense the way it did this week, they have a real chance to go on a run over the next few weeks.

Is Barnes Starting To Find His Rotation?

Tennessee has played more players this season than it has in the previous four. Barnes has talked about how finding a rotation has been a struggle and that he’s been waiting for players to create separation themselves.

Whether that separation has occurred or not, Barnes rotation has found some consistency the last few games.

Since benching Fulkerson, Tennessee’s rotation has stayed the same. Olivier Nkamhoua and Plavsic start and Fulkerson and Brandon Huntley-Hatfield sub in together and the Vols ride the hot hands.

Against Vanderbilt that was Plavsic and Nkamhoua. The duo combined for 43 minutes while Huntley-Hatfield and Fulkerson combined for 30 minutes. Against LSU, the Vols rode Plavsic hard (28 minutes) while the other three front-court members played 14 or 15 minutes.

The Vanderbilt game had more interior minutes due to Josiah Jordan James’ injury. In the last five games, James has played 30% of the game at the four and 25% of the game at the three. While that is a reliable option, Tennessee’s top three most used lineups include two front court players.

At guard, Victor Bailey Jr. has gotten cut out of the operation. The senior guard played just two minutes at Vanderbilt and didn’t play against LSU. Bailey will certainly play again, but he does seem to be the odd man out between Kennedy Chandler, Santiago Vescovi, Zakai Zeigler and Justin Powell.

The interesting case is Jahmai Mashack. Barnes has raved about the freshman wing and talks about wanting to find him playing time. With James injured for much of the Vanderbilt game, Mashack earned seven minutes even playing the four in small ball lineups.

However, the LSU game showed Mashack’s limitations. The California native played seven minutes and the Vols’ offense went into their biggest dry spell of the game with Mashack playing the three.

How Good Of A Home Team Is Tennessee?

Tennessee is 10-0 at the friendly confines of Thompson-Boling Arena this season, but oddly it still feels hard to gauge what quality of team the Vols are at home.

That has nothing to do with the team itself, Tennessee has taken care of business at home picking up top 10 NET wins over Arizona and LSU. The Vols struggled in wins over Tennessee Tech and Ole Miss but played as expected in other wins.

The question comes from the sheer lack of quality opponents Tennessee has faced at home. The Vols have earned two tier one wins at home, three tier three wins at home and five tier four-wins.

The question is twofold. Can the Vols keep their foot on lesser opponents at home and also take care of tier two opponents? They’ll see one on Wednesday night when Florida comes to town.

The second question is whether Tenenssee can keep competing with the SEC’s best when in its own house. So far, so good. The Vols have great wins over Arizona and LSU and won’t face many opponents better than them.

Tennessee still has two more of those high quality tests when Kentucky and Auburn come to town. If the Vols play like they did against LSU and Arizona, they’ll be in the thick of both of those games. Just winning one of them would be a nice development for UT.

As of right now, KenPom gives Tennessee over a 50% chance of winning every single one of its home games. If they do that, Tennessee will almost assuredly finish in the top four of the conference.

Opportunity For Tennessee To Go On A Run Emerging

With the month of January not even over, Auburn seems to have a firm lock on winning the SEC regular season title.

That doesn’t mean there’s not an opportunity for Tennessee to climb up the SEC standings and the NCAA Tournament seeding.

Going 2-0 this week to get back above .500 in SEC play as a huge start. Picking up two wins this week — especially in the lone SEC battle with Florida — would be massive.

If Tennessee can beat Florida and get to 5-3 in SEC play, they have a chance to climb up the conference standings the first two weeks of February.

Home matchups with Texas A&M and Vanderbilt book-end road trips to Mississippi State and South Carolina. The Vols will be favored in all four of those games and the roadtrip to Starkeville is the only game that wouldn’t be an upset loss if the Vols dropped it.

At worst, Tennessee should go 3-1 in that stretch and 4-0 is a very real possibility. Obviously, that’s asking a lot of things that aren’t near locks to happen, but if it does Tennessee will sit at 9-3 in SEC play heading into the final third of the conference season.

That likely won’t be enough to give UT a real chance at the conference crown, but it will put some pressure on Auburn and would have the Vols in the next highest group entering the home stretch.