Tennessee baseball dropped its first game of the 2022 season Friday night, falling to No. 1 Texas, 7-2, in the opening game of the Shriners Hospitals for Children College Classic.

The Vols and Longhorns brought the nation’s No. 1 and No. 2 team-ERAs into this matchup. The top 20 matchup proved to be a pitcher’s duel while both team’s starters were on the mound before the offenses found life late in the game.

Tennessee freshman Chase Burns was dominant in his first taste of big time college baseball. The right-handed pitcher’s slider/cutter was dominant as he struck out 10 batters and allowed just three baserunners in five innings. The Longhorns tallied one run on Burns thanks to a Trey Faltine solo home run in the fifth, but the freshman was spectacular.

LHP Pete Hansen has spent the last few seasons building up the reputation as one of the nation’s best pitchers and he earned the billing Friday. The Vols tallied just one run off Hansen in six innings.

Tennessee made hard contact off of Hansen — and some Texas’ bullpen arms — but couldn’t seem to find many holes in the Texas’ defense.

The game changed in the sixth inning when Tennessee went to its bullpen and Camden Sewell. The Longhorns tallied back-to-back doubles off the senior to open the inning, but it looked like the Vols might limit the damage. A fielder’s choice gave Tennessee out number one before Jorel Ortega booted a double play ball.

Instead of an inning ending double play to keep Texas’ lead at 2-1, the Longhorns picked up and a run on the error and continued to capitalize with another run in the inning.

The Longhorns added three more runs in the seventh inning off of Will Mabrey and Ethan Smith.

Despite Tennessee’s bullpen struggles, the Vols had chances to climb back in the game. The Vols tallied a run in the seventh inning and had runners on second and third with one-out thanks to a Cortland Lawson double that Texas’ third baseman Skyler Messenger booted.

However, Tennessee failed to capitalize as Seth Stephenson popped up and Luc Lipcius struck out to end the inning. One inning later, Tennessee stranded the bases loaded.

The Vols hit one-of-nine with runners in-scoring position and stranded eight runners on base in their first loss of the season.

Tennessee will look to bounce back tomorrow afternoon against Baylor at 4 p.m. ET. RHP Chase Dollander will get the ball for the Vols. 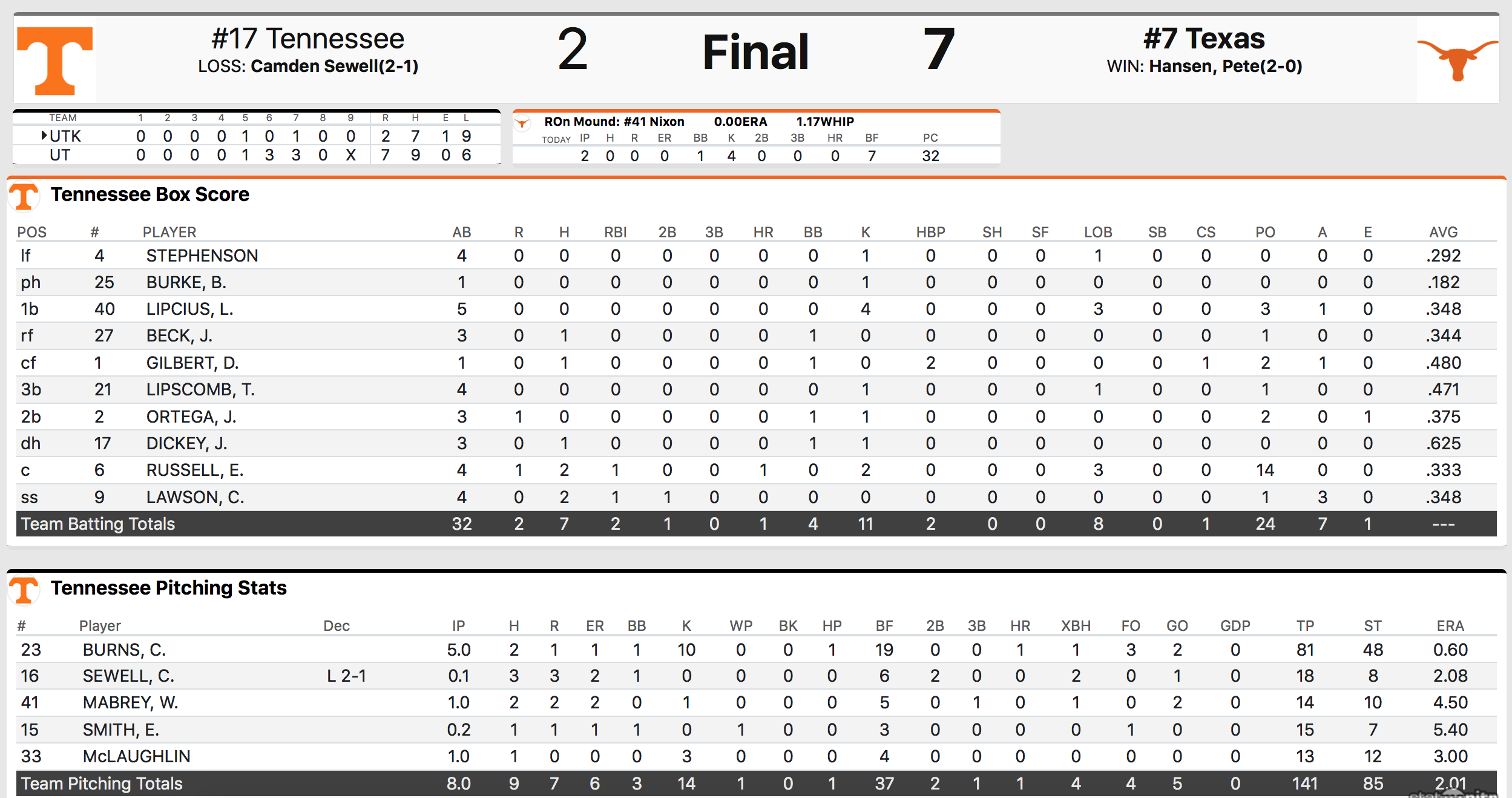