There’s nothing like a uniform rumor to really get a spring day in March rolling.

On Monday morning, as he was wrapping up his extended stay in Knoxville over the weekend for a visit, five-star quarterback recruit Nico Iamaleava may have revealed some news about new Tennessee football uniforms on the way. While speaking with VolQuest for a video interview on Monday, Iamaleava spoke about his favorite uniform combination that Tennessee has, but may have gone a bit too far in the tease. A to Z Sports’ Zach Ragan posted the clip to Twitter on Monday.

Rumors aside, Iamaleava seemingly all but confirmed new Tennessee uniforms.

Tennessee broke out the brand-new “Dark Mode” uniforms for the first time last year, featuring all-black jerseys, black pants, and a redesigned traditional white helmet to incorporate new dark mode elements into it. Tennessee’s dark mode uniforms were a massive success among players, but they have also made a big impact in the recruiting scene so far.

While some don’t think uniforms matter to kids, that couldn’t possibly be further from the truth. These are kids who have grown in a social media world their whole lives and understand the value that social media has. Kids want to be on TV, be on the internet, and look good while they are doing it to build and sustain their own personal brand. Having new uniforms may go against Tennessee’s “tradition”, but it’s past time to evolve. Tennessee will never go away from their classic orange and white, but there are opportunities out there to add in more uniform combinations, styles, and potentially even colors.

Welcome to 2022, where flash equals cash. Simple as that. 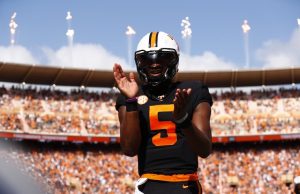