Two highly anticipated quarterbacks, Tayven Jackson and Navy Shuler, made their Tennessee spring camp debut during the Vols’ first practice on Tuesday morning. While Tennessee does have Hendon Hooker leading the offense heading into next season, the Vols’ two new faces in the quarterback room are drawing some fresh attention.

First up was incoming freshman quarterback Tayven Jackson, who was a four-star recruit in the class of 2022. Jackson was one of Heupel’s earliest commits back in April and helped set up a good foundation for his first official recruiting class. A silky smooth quarterback in the pocket, Jackson is a proven winner having won his final 28-straight high school games including two Indiana State Championships.

Jackson looked comfortable and in rhythm throwing the ball on Tuesday as head coach Josh Heupel and quarterbacks coach Joey Halzle looked on. When paired up with the receivers for a brief moment, Jackson’s throws were sharp and on target.

The other Tennessee quarterback that made his debut in the Vols’ spring camp barely needs an introduction. The son of Tennessee legend Heath Shuler and former Appalachian State quarterback Navy Shuler is in Knoxville and wearing the same number that his father did on the Tennessee Football field.

Shuler has spent the last two seasons at Appalachian State but did not have any playing time on the field. Deciding it was time for a change, Shuler hit the transfer portal this offseason and decided to take his talent over to Knoxville.

Navy’s father, Heath, was a two-year starter for Tennessee in the early 90s. During his career at Tennessee, Shuler threw for 4,089 yards, 36 touchdowns, and 12 interceptions adding 383 yards and 14 touchdowns on the ground. In addition, Shuler also finished as the Heisman Trophy runner-up in 1993 before moving on to the NFL as the third overall pick in the draft. 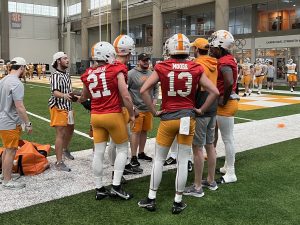 Tennessee’s quarterbacks at the start of spring camp. Photo by Rocky Top Insider.

Full highlights from Tennessee’s first practice of spring camp on Tuesday morning can be found here.