#1 Gonzaga Gets Eliminated In The Sweet 16 By #4 Arkansas

Tennessee and Ole Miss top five baseball series in October is only a few innings underway but the rivalry and trolling is already well underway.

Ole Miss football coach Lane Kiffin started the fun, throwing out the first pitch but throwing out a golf ball instead of a baseball.  The third-year Rebels coach played fun at the golf ball that got thrown at him as Vol fans threw trash on the field following a controversial spot late in Ole Miss’, 31-26, win in Knoxville last fall.

Lane Kiffin may not have been able to find a mustard bottle, but Tennessee’s baseball team brought one with them to the Magnolia State.

The Vols jumped on Ole Miss in the second inning of Friday night’s series opener capped off by a two-run Jared Dickey home run.

As Tennessee celebrated taking a 6-0 lead on Ole Miss, you can see a teammate toss Dickey a mustard bottle before the redshirt-freshman outfielder donned the Vols’ home run celebration coat.

A mustard bottle was one of the odder, more infamous, items thrown on the Shield-Watkins field in the waning minutes of October’s game. 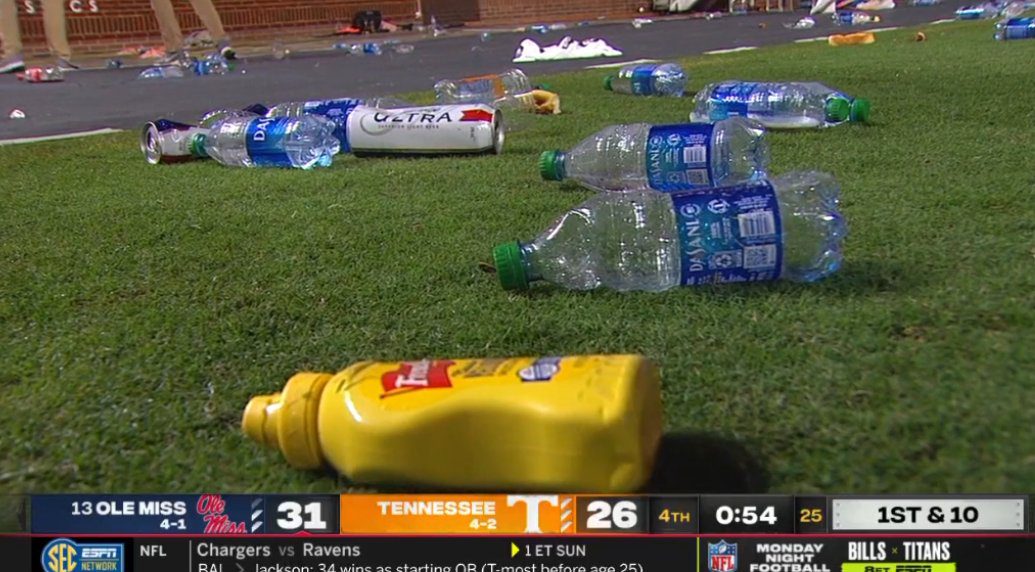 Tennessee’s SEC road opening series at Ole Miss begins a 10-day gauntlet for Tony Vitello’s baseball team. The Vols follow up the weekend in Oxford with a road trip to rival Vanderbilt.

The Vols lead 7-0 in the fifth inning of Friday’s series opener at the time of publishing.

UPDATE: Tennessee defeated Ole Miss on the diamond by a score of 12-1. Check out RTI’s full postgame recap here.