The story between Tennessee and Florida continues to grow.

On Sunday afternoon, No. 1 Tennessee defeated Florida in 11 innings on the diamond to complete the series sweep in Gainesville. Following the contest, Tennessee’s team was taken to the Florida football facilities to shower and clean up. A video was then posted to Instagram showing some of the Tennessee players donning Florida football helmets in the equipment room.

Tennessee Baseball is decked out in Florida Football helmets after sweeping the Gators in Gainesville. Photo via Evan Russell on Instagram. pic.twitter.com/JaDnHqvOHE

After the picture garnered significant attention on social media, one Florida football player responded to the image on Twitter, but then took down the tweet.

“You shall reap what you sow,” Gators linebacker Chief Borders said in a tweet according to Nick de la Torre, Florida Gators Senior Writer for On3 Sports and GatorsOnline.

The following screenshot was shared by de la Torre of Gators Online on Sunday. 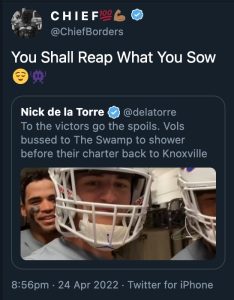 Borders sent the tweet on Sunday as shown by the screenshot that was taken. However, by Monday morning, the tweet looks to have been deleted.

The top-ranked Vols swept the Gators on the diamond this weekend. Tennessee took the first game on Friday night by a score of 8-2, which was followed by a 3-0 Tennessee win on Saturday night. Tennessee outfielder Christian Moore was the star of the show on Sunday, though, as he made multiple game-extending plays to help secure the win and the series sweep for the Vols.