The latest Duke sunshine post from FOX Sports is rather laughable.

On Monday, the FOX College Hoops Twitter account ran a poll, asking for users to vote on their pick for college basketball’s freshman of the year. The candidates for the poll included Gonzaga’s Chet Holmgren, Auburn’s Jabari Smith, Duke’s Paolo Banchero, and Tennessee’s Kennedy Chandler.

After more than 10,000 votes were cast, Tennessee point guard Kennedy Chandler came away as the winner with 49.9 percent of the votes.

FOX Sports would then go on to troll the 9,300-plus fans that voted against Banchero saying, “We asked, you answered,” before promptly naming Duke’s Banchero as the winner. Banchero was not the winner of the fan poll on Twitter – in fact, he finished in second to last place with a fraction of the votes.

We asked, you answered 👌

The Freshman of the Year is @Pp_doesit as voted by CBB on FOX Fans 💯 pic.twitter.com/giDaNkssNR

As you can see below, Chandler was the clear winner of the poll. Chandler came away as the winner with eight shy of 5,000 votes, with Jabari Smith coming in second place with roughly 4,032 votes. FOX’s “Fan Winner”, Paolo Banchero, finished second to last with roughly 680 votes, and Holmgren rounded out the list with just 290 votes.

At the end of the day, this poll is meaningless, and not just because the end results were a sham. The poll is meaningless because it’s not the actual award, just an engagement activity on social media. But even still, the logic behind the final result is mind-boggling.

Let’s do some investigating.

So, out of the 1,249 votes that were cast on Instagram, Banchero does take the poll with 51 percent. Which is almost the same percentage that Chandler received with just about eight times the amount of votes. Even if you add the Twitter votes and the Instagram likes together, Banchero still doesn’t even come remotely close to either Smith or Chandler.

But wait, there’s more. FOX also dropped the same post onto their Facebook account on Monday. After some very quick investigating, though, it’s clear to tell that Facebook’s opinion didn’t carry much weight. Only 10 votes were cast in the Facebook post’s comment section, with three choosing Chandler, three choosing Banchero, and three choosing Smith. Some respondents had multiple answers, but at the end of the day, only 13 total comments are in the thread anyways.

Unless there is yet another poll, far more heavily weighted, that has been taken off the FOX website, the point of FOX’s poll seems to just have been to garner engagement with a result already in mind. 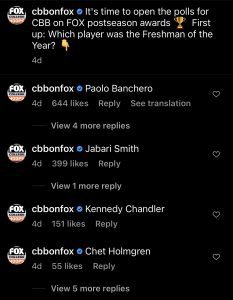