Tennessee Charges Back To Take Series Opener Over Auburn

Tennessee fell behind Auburn in the middle innings of Friday’s series opener at Lindsey Nelson Stadium. However, the Vols poured it on the No. 19 Tigers in the final innings to earn a, 17-4, series opening win.

Here’s everything to know about Tennessee’s 38th win and 18th SEC win of the season.

The bottom half of the second inning began poorly for Auburn. Tigers’ starter Hayden Mullins surrendered a leadoff single to Drew Gilbert then walked Trey Lipscomb on four pitches.

Auburn was ready for Luc Lipcius to lay down a bunt, but the first baseman angled it perfectly forcing the left-handed pitcher to make the play. Mullins fired the ball into right field allowing Gilbert to score and the Vols to have runners on second and third with nobody out.

Evan Russell brought a run home and moved Lipcius to third with a sac fly to right field. Things briefly turned for the Tigers when a fielder’s choice to third kept Lipcius from extending Tennessee’s lead.

However, Mullins threw just one more pitch. Auburn catcher Nate LaRue came for a mound visit and waived the Tigers’ trainers to join him.

Mullins — who’s dealt with elbow injuries in his career — was shaking his throwing arm before exiting the game.

“Early in the game was just kind of awkward with how everything went down,” Tennessee head coach Tony Vitello said. “Obviously, I don’t know if it was the right thing to say but I told coach (Butch) Thompson I hope his two guys are fine. Boy do you want to beat the Friday starter on the other team but you don’t want it to go down like that, and then it kind of slipped into we had a lull for whatever reason.”

Falling behind 2-0 in the second inning due to fielding mistakes? Not ideal but manageable.

Losing your Friday night starter less than two innings into the game when you have a very thin bullpen? A much bigger problem.

Auburn used eight pitchers in the series opener and that could pay dividends for the Vols the rest of the weekend.

Tennessee Friday night starter Chase Burns hasn’t been at his best since his dominant outing at Ole Miss last month.

The freshman hasn’t been bad since then. He had two short outings against Missouri and Alabama and was good but not great against Vanderbilt in Florida.

Burns dealt with some command issues in those starts and after retiring six of the first seven Tigers he faced ran into trouble.

Following a Nate LaRue leadoff single, Burns surrendered back-to-back walks to load the bases with no outs for the heart of the Auburn order.

“That was insane,” Vitello said. “There’s no other way to say it. That was insane. … Obviously he kind of created his own mess to an extent, but to work out of it is one thing. To do it in the fashion he did is another and then to do it against those hitters. That was nuts. In the end that could have been a big ole mess.”

Burns stranded a pair of Auburn runners in-scoring position an inning later and the two jams led to a shorter outing. The freshman exited after surrendering a leadoff single in the sixth inning. That runner coming home was the only earned run the freshman gave up.

Tennessee junior Will Mabrey has been arguably the SEC’s best reliever this season. The left-handed pitcher entered the weekend series having allowed just three earned runs.

He relieved Burns — as he often does on Friday night — but the Tigers lit up Mabrey in an extremely rare poor outing.

Mabrey entered the game in a 2-0 count and worked it full before surrendering the no-outs walk.

A Brody Moore single loaded the bases with nobody out to recreate the third inning jam in the sixth.

Mabrey looked like he might follow suit, striking out Nate LaRue for out number one. Cole Foster ended the shutout with an RBI single up the middle but a good throw by Drew Gilbert and an elite diving tag from Evan Russell preserved Tennessee’s lead and gave the Vols’ their second out.

It looked like Tennessee would escape a tumultuous inning with the lead, but Auburn leadoff hitter Blake Rambusch took Mabrey deep to center field for a go-ahead three-run homer.

The Tigers exited the inning with a 4-2 lead, and while Burns earned the first run, the Tigers doubled Mabrey’s earned runs allowed on the season from three to six.

The Vols had three hits entering the seventh inning, and while they consistently had baserunners thanks to a handful of walks they rarely threatened after the second inning.

42 minutes, nine hits and 11 batters later Tennessee not only led but led sizably thanks to the eight-run inning.

“The cap needed to come off and it came off kind of in extreme fashion there,” Vitello said.

The Vols scored their first five runs before Auburn recorded an out. After falling behind 1-2 and a long mound visit due to a potential injury from Blake Burkhalter.

The first pitch after the delay, Jorel Ortega roped a grand slam into the left field porches to reclaim the lead for Tennessee.

Evan Russell — who squared up a pair of balls for fly outs earlier in the game — broke the game open with a three-run opposite field home run into the Tennessee bullpen.

Tennessee entered the bottom of the seventh inning on the ropes and exited it with the game all but wrapped up.

If they didn’t have it wrapped up in the seventh they finished the deal in the eighth.

Tennessee hit four home runs in a seven-run eighth inning. Ortega and Russell added their second home runs in as many innings and Blake Burke and Trey Lipscomb added two-run homers themselves.

In a two inning stretch, Russell hit two home runs and a double.

The Vols scored 15 runs in 20 at-bats and recorded 16 hits in two innings. Just a remarkable two innings of offensive output for Tennessee.

“When I was at Arkansas with Mr. (Luke) Bonfield on that staff w put together a couple of days in a row that were similar,” Vitello said of the offensive explosion. “I was like I wish we could bottle this up. You can feel it. … I’m all for guys building confidence from today, but you pointed it out that’s a unique deal that went on. The odds of replicating it aren’t great but if you take confidence from tonight and have some more of those scratch and claw at-bats then you’re likely to have success.” 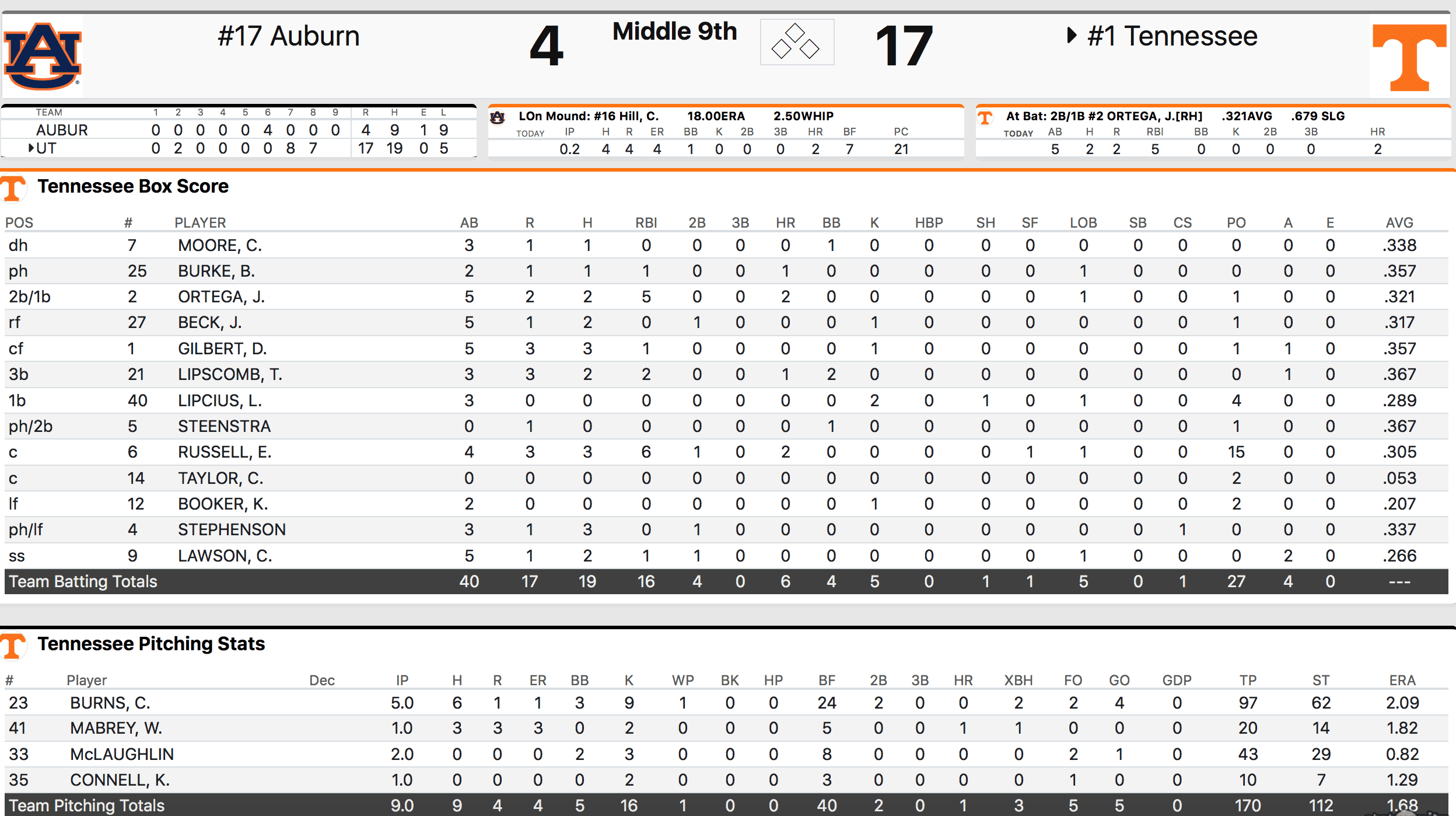 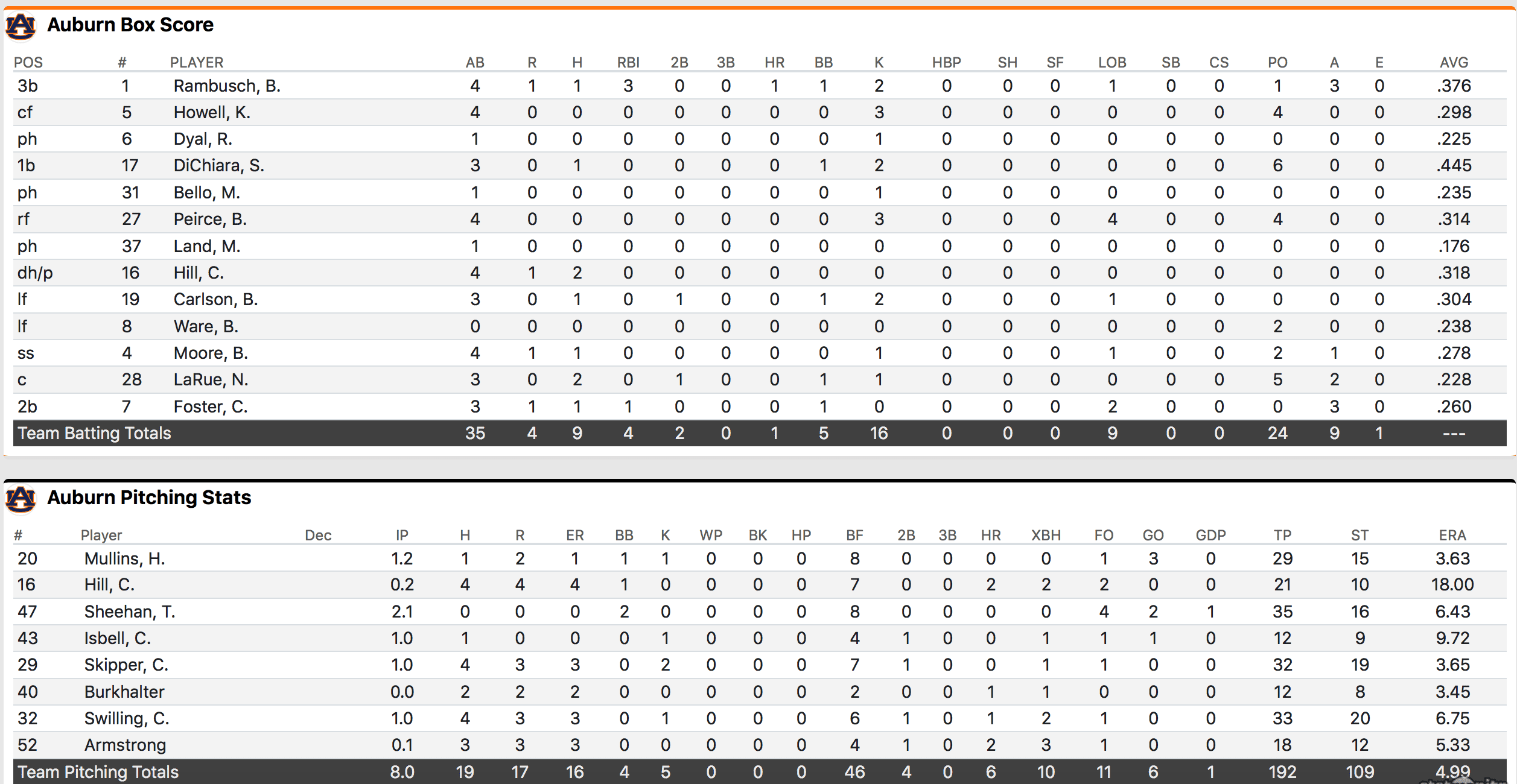