Tennessee was a one out away from taking game two and clinching the weekend series over No. 19 Auburn. Then, the Tigers exploded for four runs with two-outs to take the lead and eventually even the series, 8-6.

Here’s everything to know about Tennessee’s second loss of SEC play.

Tennessee sophomore Blade Tidwell made his second SEC start of the season Saturday night and after a strong first inning struggled.

Tidwell sat the Tigers down in order in the first looking as strong as he did in last week’s two-hit outing at Florida.

From there, the sophomore flame thrower struggled to find his rhythm. Tidwell surrendered a one-out single and walk, and after getting a line out for the second out of the inning surrendered another walk to load the bases.

The Loretto, Tennessee native got out of the jam in the second but wasn’t so lucky in the third.

Tony Vitello beat Tidwell — who was covering home — back to the pitcher’s mound to take the ball from the sophomore and pass it off to Will Mabrey.

“Blade’s always going to be intense, but he didn’t kind of seem to have the attack that he did against Florida,” Tennessee head coach Tony Vitello said. “To me, unfortunately watching on a laptop against Florida, it looked like he was told you only get 50 pitches no matter what today. Obviously he had more than that, but, again do what you can with them. … That’s kind of how he pitched and tonight wasn’t the case. Maybe because it was whatever setting and, again, a good opponent, but stirring things off to his glove side was the physical part, but he didn’t have the tenaciousness he had down in Gainesville.”

Tidwell gave up just the one run in 2.2 innings pitched, but was far from his best and struggled to find the strike zone. If you can’t find the strike zone, Vitello and pitching coach Frank Anderson aren’t going to have a long leash for you. The right-handed pitcher’s outing was a perfect example of that.

Tennessee made a handful of uncharacteristic plays in its win over Auburn.

It starts with what plagued Tidwell. Under Anderson, Tennessee’s pitching staff has prided itself on throwing strikes, trusting its defense and making hitters beat them. The Vols didn’t do that on Saturday surrendering a season-high seven bases on balls.

Two of Auburn’s four runs were scored by runners who reached base on balls, and three of the four pitchers Tennessee used surrendered walks.

First baseman Luc Lipcius couldn’t handle an accurate Camden Sewell pick off attempt allowing the ball to roll into right field and the runner to reach third base.

Cortland Lawson was extremely fortunate not to be picked off at second base with one-out in the third inning. Cole Foster’s tag beat Lawson to the base but the second baseman bailed Lawson out by dropping the ball on the tag.

“I don’t think if either coaching staff had a board room meeting tomorrow on this game tonight I don’t think either team can say they played well, but it was kind of a muck-and-grind game and we didn’t do it as well as they did or as well as we needed to,” Vitello said.

The Vols made a handful of really nice defensive plays — especially Camden Sewell — so it wasn’t all bad. But a number of rare mistakes cost Tennessee early in the game.

The Wild Pitch Off

The Tigers made some costly mistakes in the bottom of the sixth inning.

Pinch hitting Christian Moore came to the plate with the bases loaded and two-outs, looking for a base hit to tie the game.

The freshman flew out to center field, but Tennessee exited the inning all knotted up at four.

Lipscomb trotted the 90-feet home to tie the game and we had a brand new ball game entering the seventh inning.

Drew Gilbert missed seven games due to injury earlier this season and has just four home runs — good for 10th on the team — on the season.

Still, Gilbert is second on the team with 40 RBIs and always seems to deliver in big moments. That’s especially true with two-outs and the junior furthered that case Saturday night.

The centerfielder put Tennessee on the board with a two-out single up the middle in the first inning and reclaimed the lead for the Vols with a line drive single to right center field in the seventh inning.

Redmond Walsh was one-out away from earning his sixth save of the season and 22nd save of his career.

Auburn had a runners on third thanks to a Nate LaRue leadoff single and strong small ball. Kason Howell made sure that small ball paid off, flaring a game tying double into left field.

The Vols’ intentionally walked Auburn star Sonny DiChiaro before Bobby Peirce made them pay. The junior right fielder launched a no doubt, three-run homer into the left field porches to give Auburn the game two win.

It was a rare poor outing for Walsh — who retired the Tigers in order in the eighth inning — as Auburn made a major statement to tie up the weekend series.

“LaRue stayed to the ball and hit it up the middle. If it’s got a little more height to it our centerfielder catches it, but the guy did a good job and he kind of set the table there,” Vitello said of Walsh ninth inning. “That’s what you want in that inning, to throw strikes, and thats what he did. Then fast forward you’re kind of right where you want to be. Obviously, you’d prefer no one is on base but it ain’t a perfect world and it’s a good team we’re playing, so then the guy (Peirce) gets him.”

Some drama unfolded after that long ball when Vitello tossed Peirce’s bat — which rolled to the UT dugout on the flip — back to the Auburn dugout. The Tigers took exception to the toss and jawing ensued.

When Anderson came out for a mound visit, things intensified with both dugouts briefly clearing. The umpires did a good of staying between the two sides and things never escalated past talking.

“The bat ended up in our dugout,” Vitello said. “If it was a true dugout it would have gone in the dugout but instead it was resting on the net, so someones got to get it so I grabbed it and threw it over there and a lot of extra stuff happened after that from our side and their side that maybe didn’t need to happen, but everyone’s trying to win. It’s the SEC.”

The comeback handed Tennessee its third loss of the season and was the first game the Vols blew late. 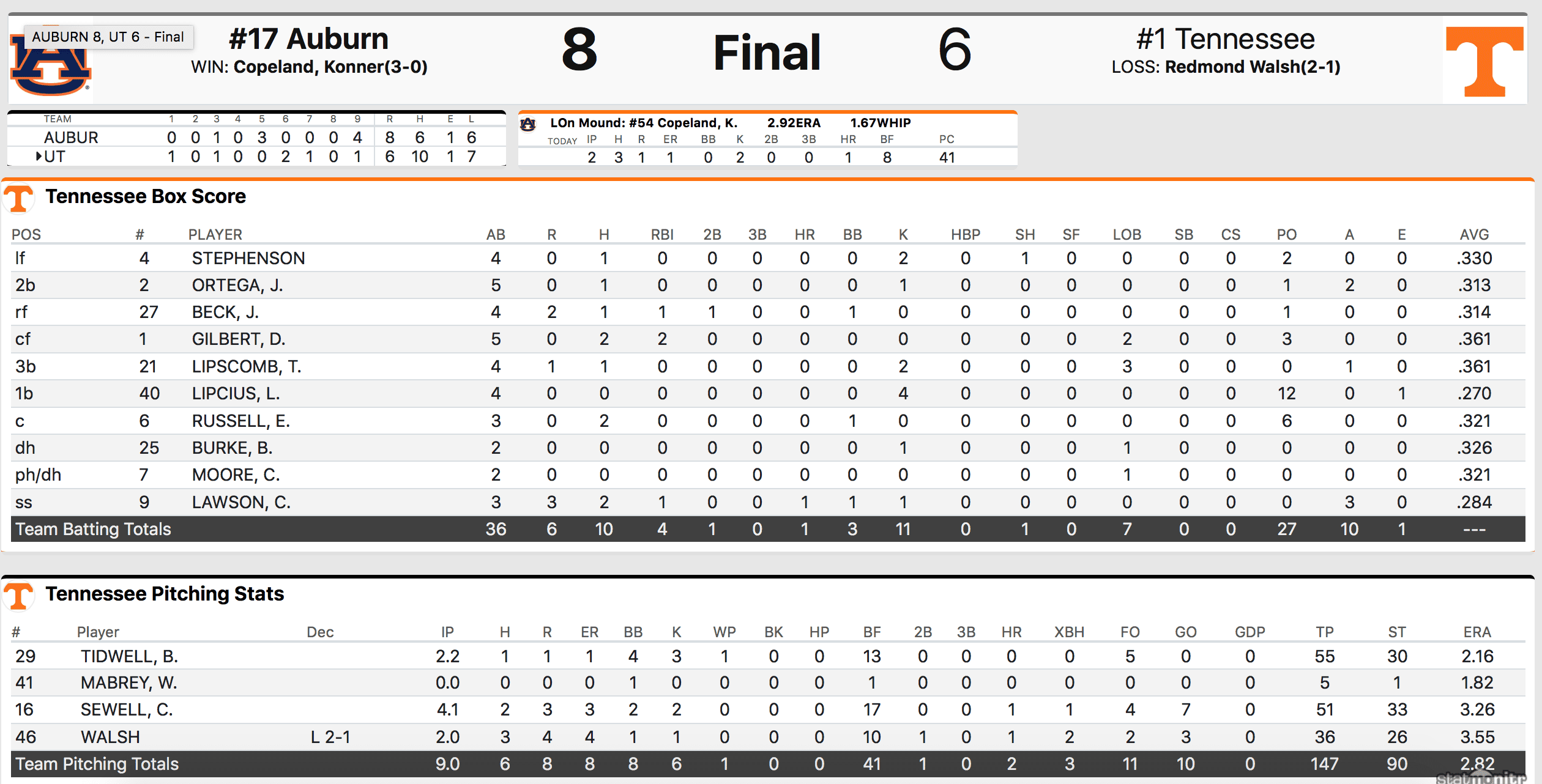 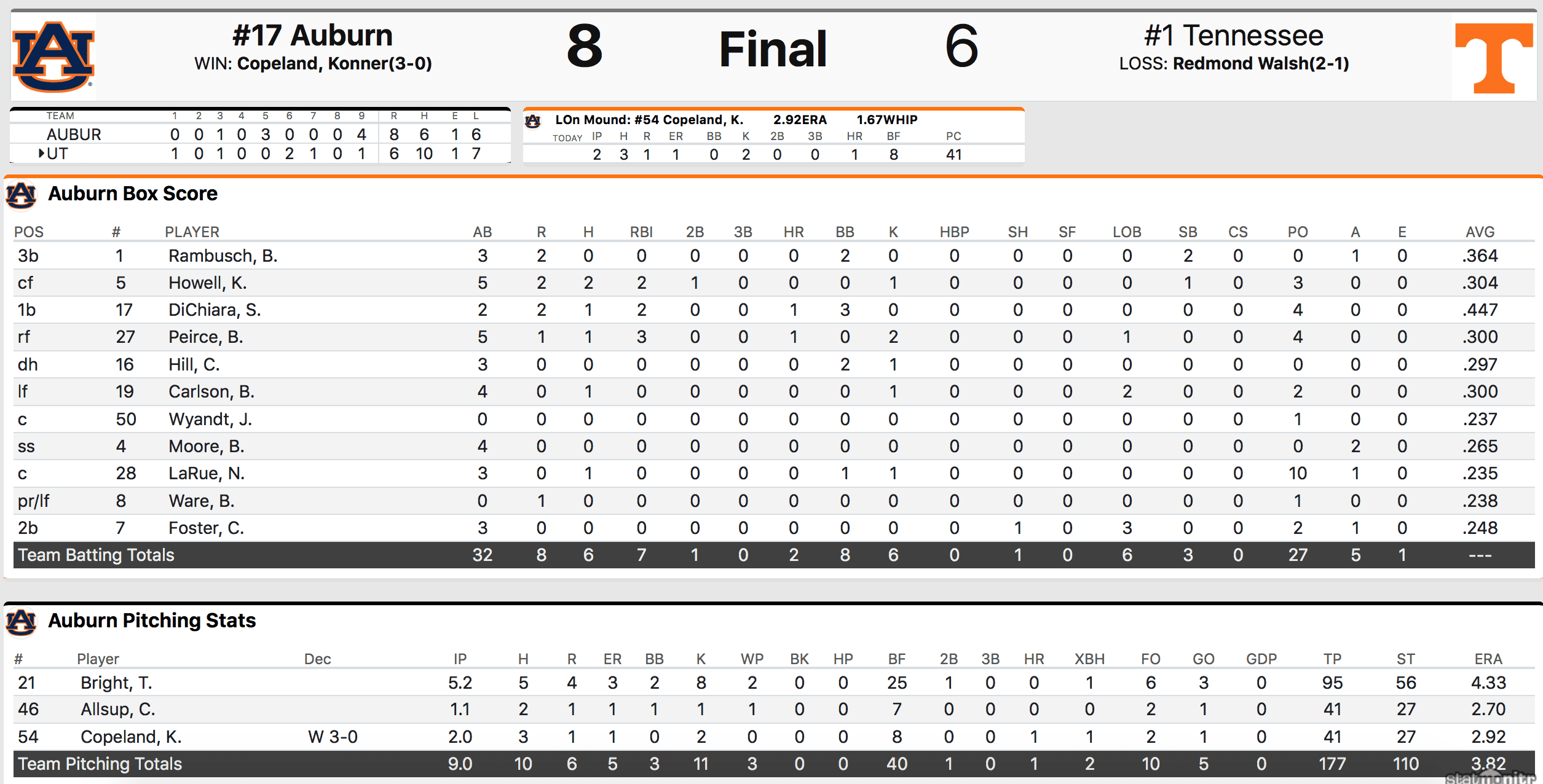 “I think we’re all ready to come out here at one o’clock is all I can say,” Tennessee reliever Camden Sewell said. “We’re pretty juiced to come out tomorrow.”

The SEC Network+ will stream the game.