The line “all work and no play” was popularized in Stanley Kubrick’s film The Shining in 1980. The phrase’s meaning most commonly tracks around the idea that too much work without adding in play can make a person dull. The Tennessee football team and quarterback Hendon Hooker have adapted the phrase for their own this spring, although, with a much different result.

For the Tennessee football team, all work and no play this summer will equal a productive stretch en route to a hopeful season in Knoxville.

On Monday night, ESPN and the SEC Network released their all-access look into Tennessee’s spring camp from the month of April. During the half-hour production, Vol Network’s Kasey Funderberg spoke with head coach Josh Heupel, Hendon Hooker, and defensive back Trevon Flowers to get a sense of the state of the program.

“We gotta grind,” Hooker said about Tennessee’s summer plans. “There’s no time for vacation, so this summer is all work no play.”

The mindset of “no play” doesn’t equal “no fun”, though. As Hooker puts it squarely, football is a fun game at its core.

“It’s football, so every aspect of it is fun,” Hooker said. “Coming out there and joking around while were stretching or letting the big guys catch a couple of over-the-shoulders. It’s all fun.” 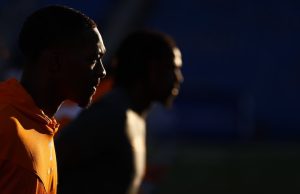 Tennessee QB Hendon Hooker warming up before taking on No. 18 Kentucky. Photo by Tennessee Athletics.

Being back on the field this spring gave Hooker a chance to reconnect with his old teammates, but also play ball with the new ones. The Vols have welcomed in quite a few new faces since last season ended via recruiting and the transfer portal, which means that Hooker, as the quarterback, has a pretty good view of most of the people on the field.

“It felt natural,” Hooker said when recalling how it felt to be back on the field with his teammates this spring. “Coming out there day one, we had a couple of guys that were a little sluggish. But they hit the ground running. Especially the young guys coming in. This is their first practice in moving fast in the offense and thinking at a high speed. So just seeing those guys gradually catch their stride and end up looking really good at the end of spring.”

For Hooker, though, the spring was a chance at self-evaluation. As he spoke about with Funderberg on the all-access program, the Tennessee quarterback is spending a good amount of time preparing himself mentally for the challenges ahead.

“Keeping my mental at a steady pace,” Hooker said about his biggest takeaways from the spring. “Keeping that even-keel mindset and making sure everyone around me is comfortable so that we are all moving on one accord.”

Heading into Josh Heupel’s second year in Knoxville, expectations are rising after a 7-5 regular season last year with a bowl appearance. Heupel’s fast-paced offense took the league by storm and helped Tennessee gain the edge on some of their top rivals like Kentucky and South Carolina. However, as mentioned before, the expectations in Knoxville are rising fast. Quarterback Hendon Hooker was a strong leader for Tennessee last year and looks to be only improving in the off-season.

While there are still countless variables on the table for next season, one thing is certain. The Tennessee Volunteers are going to be “all work” this summer en route to the fall season.

“We gotta grind. There’s no time for vacation, so this summer is all work no play.”

Hendon Hooker is looking forward to being back with @Vol_Football this season 💪🍊 pic.twitter.com/Q43Hjm4F1P