Tennessee played its worst game of SEC play, struggling offensively in a, 3-2, 13 inning loss to Kentucky. The Wildcats’ win marks the first series opening loss of the season for the Vols.

Here’s everything to know about the series opener in Lexington.

However, Tennessee struggled to capitalize on Hagenow’s command issues, stranding the bases loaded the first three innings of the game.

The biggest missed opportunity came in the first inning when two Tennessee batters worked walks and a pair of Vols singled. However, a Seth Stephenson baserunning mistake and a Luc Lipcius strikeout to end the inning kept Tennessee off the scoreboard.

Tennessee used strong two-out hitting before stranding the bases loaded in the second inning as Stephenson worked a two-out walk and Jorel Ortega drove Kyle Booker in with a single to left field.

After Jordan Beck worked a walk to load the bases, Drew Gilbert flew out to end the inning.

Kyle Booker’s one-out walk to load the bases ended Hagenow’s day in the third inning and reliever Wyatt Hudepohl walked Cortland Lawson on four pitches to bring a run in.

The right-handed reliever kept the damage at one run, however, as Stephenson and Ortega struck out chasing breaking balls in the dirt.

Tennessee didn’t strand the bases loaded in the fourth inning, but they did strand Gilbert on third with one-out.

The missed opportunities proved costly as the Vols’ offense struggled to get anything going against the Kentucky bullpen.

Tennessee head coach Tony Vitello is typically hesitant to pull his starting pitcher, more likely to pull a pitcher an at-bat too late than an at-bat too early.

That wasn’t the case in the series opener when Vitello pulled starting pitcher Chase Burns after just four innings and 67 pitches.

Burns looked strong the first three innings, allowing a pair of singles in the first inning before allowing just one baserunner the next two innings.

However, Kentucky got to Burns in the fourth inning, using a pair of solo home runs to tie the game. The Wildcats recorded two more hits in the inning before Beck gunned Adam Vogel at the plate to end the inning.

In a tied game, Vitello didn’t give Burns the benefit of the doubt, pulling the freshman following the inning.

With Chase Dollander back from injury and Tennessee’s bullpen even deeper than normal, Vitello was aggressive with his pitching changes. The fifth-year head coach pulled Will Mabrey after just two batters following Burns’ exit.

Once the Vols ran Hagenow from the game, their opportunities became severely limited. Kentucky’s bullpen was fantastic, especially Daniel Harper who struck out four batters and didn’t surrender a baserunner in 2.2 innings pitched.

In fact, Tennessee didn’t record a hit until 11 innings after Hagenow left the game as the Vols went 31 plate appearances without a hit.

The Kentucky pitching staff ranks in the bottom of the SEC in a number of categories, but ranks in the top half in strikeouts.

The Wildcats’ leaned on their ability to get strikeouts, fanning 15 Tennessee batters on the evening.

Sewell Exits Due To Injury

Camden Sewell was finishing up another elite middle relief outing when he showed discomfort following a 3-0 strike. Vitello and trainer Jeff Wood came out to look at Sewell and while nothing appeared extremely serious, Tennessee made the move.

The senior was fantastic out of the bullpen for Tennessee, stranding a runner on second with one-out in the fifth inning to keep the game tied. That was just the start of Sewell’s stellar 2.1 inning outing where the right-hander allowed no baserunners while striking out two batters.

Sewell was at 28 pitches when his day ended. The Cleveland, Tennessee native could have returned to the mound for the eighth inning, but his day was winding down when the injury ended the outing.

We’ll update this section with quotes once Tony Vitello talks to the media postgame.

Kentucky Finally Walks It Off In 13th

The Wildcats threatened every inning from the ninth inning on in Thursday’s series opener. However, Kentucky failed to capitalize as Redmond Walsh, Jordan Beck and Mark McLaughlin made big time plays to extend the game.

However, Kentucky used a two-out rally in the 13th inning to win the game.

John Thrasher tripled to right field and then Alonzo Rubalcaba brought him home with a flare to left field. 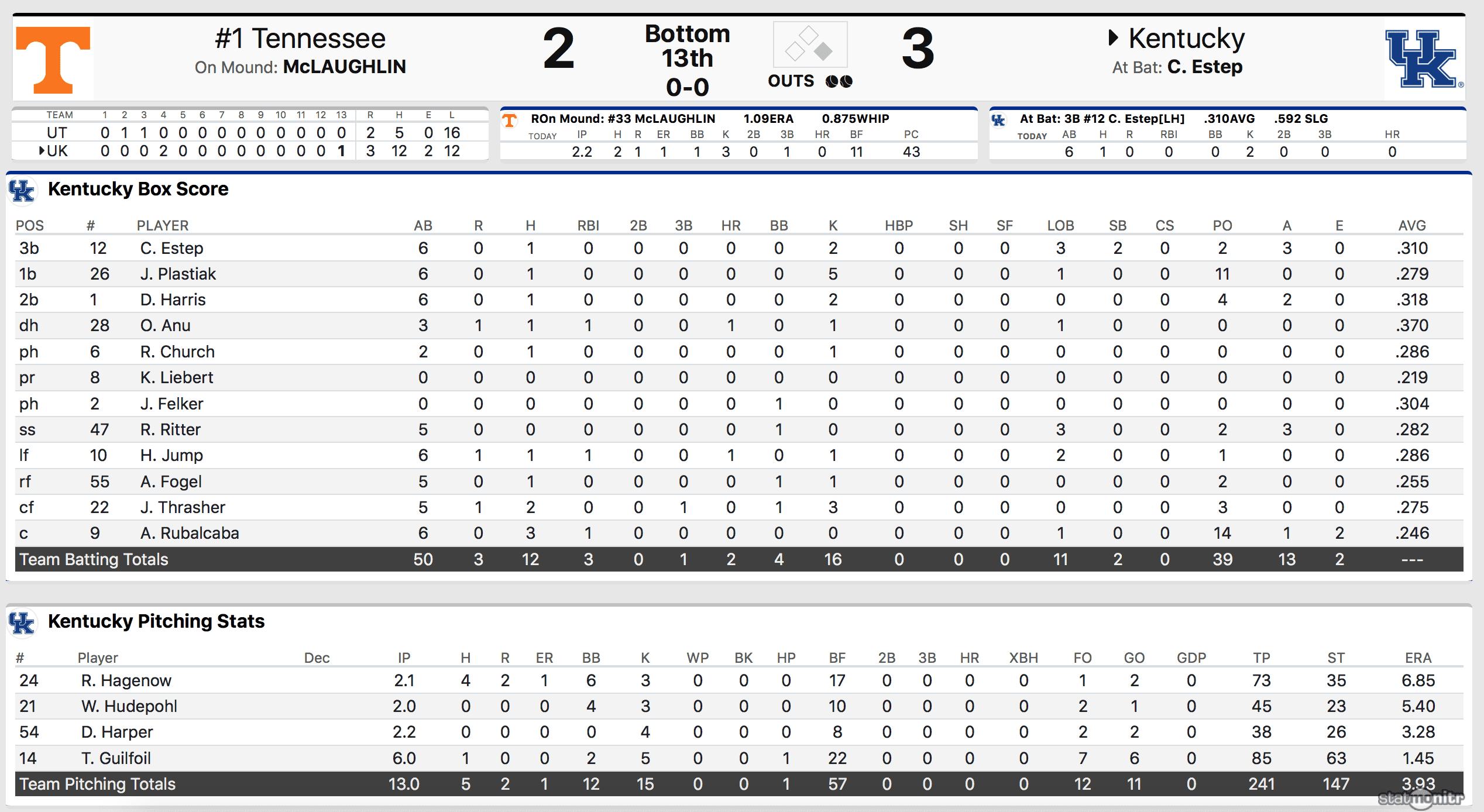 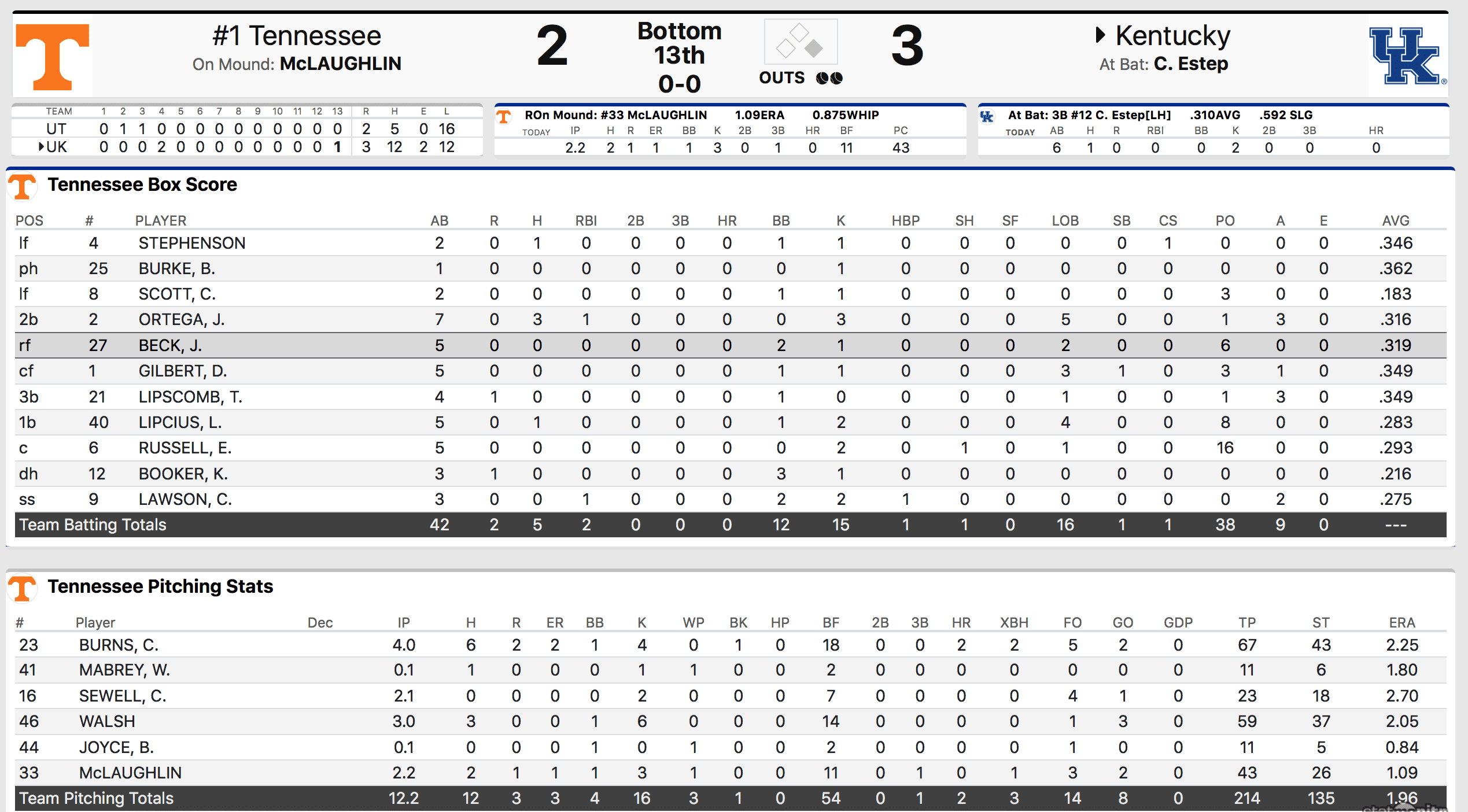 Tennessee and Kentucky will resume their three game series at 6:30 p.m. ET Friday at Kentucky Proud Park in Lexington