Tennessee baseball used a trio of long balls and a dominant outing from sophomore Chase Dollander to earn a, 5-2, series victory over Georgia Thursday night at Lindsey Nelson Stadium.

Here’s everything to know about the Vols’ series opening win over Georgia.

Trey Lipscomb opened up the weekend’s scoring, leading off the second inning with a no doubt homer into the double deck porches.

Lipscomb made a bit of history in the process, becoming the sixth Tennessee player to record 20 home runs in a season. The third baseman is the first Vol to reach that threshold since Cody Hawn in 2009.

It’s been an incredible season for the senior, first year starter, but Thursday’s history could be just the start.

Tennessee’s starting pitchers have been solid the past few weeks, but they haven’t been elite the way they were earlier in the season. Entering Thursday night’s series opener, the Vols hadn’t gotten an elite outing from one of their starters in quite some time.

That changed as Chase Dollander dazzled in his first start in four weeks and his first series opening start of the season.

“What was working for me tonight was definitely the fastball,” Dollander said. “It was playing really well off my other stuff. I have to say my changeup looked really good. My curveball looked really good tonight too. My slider was a little iffy at times but that’s something you can always work on in the bullpen or in practice.”

The Georgia Southern transfer allowed just three baserunners and one run — a wall scraping line drive from Connor Tate. Lindsey Nelson Stadium may have been the only venue in the SEC that the ball would have been a home run.

“After it traveled halfway I was like ‘yeah, that’s gone,’ Dollander said. “Welcome to Lindsey Nelson.”

Dollander’s command was fantastic, consistently getting ahead with off speed pitches while throwing 56 strikes to 21 balls in a zero walk outing.

Vitello said Dollander’s injury may prove to be a blessing in the long run. Dollander’s outing proves he may be right.

Tennessee didn’t project its series finale starter entering the weekend, keeping it open ended on whether freshman Chase Burns or Drew Beam would start on Saturday.

It was a mixed outing from the Gallatin native. Burns struck out three of the four Georgia batters he faced in the sixth inning before running into some trouble in the eighth.

Burns got ahead of Corey Collins 0-2 before hitting him with a pitch. Collins reached second on a wild pitch and scored on a Tate double. The freshman got the next two batters out before Redmond Walsh relieved him and stranded the runner on third.

“I thought he was great,” Tennessee head coach Tony Vitello said. “You could maybe pick up on sometimes when guys come out of the ‘pen versus starting, there’s a little less off the throttle type of approach in a heightened sense of intensity. Billy Beane has a great paragraph or two on that in Moneyball. Whether it’s the ninth inning or whatever, you need three outs each inning. It’s up to these guys to know what their personality is. From what I saw it was outstanding. Really, he has a guy 0-2 and he makes one poor pitch. If you take that away, he might be the guy that finishes the game. Who knows, though we’re good going to Redmond.”

Tennessee freshman Blake Burke had seven home runs in 50 at-bats on the season entering the series opener. The California native has flashed in his first collegiate season, but hasn’t earned consistent weekend starts.

After Burke went deep in the Vols’ win over Bellarmine on Tuesday, Vitello gave him a vote of confidence and started him at designated hitter.

The backup first baseman rewarded Vitello for his vote of confidence, homering twice in the series opening win.

On a night where Tennessee’s offense was mostly quiet, Burke’s two solo home runs proved massive. The Brentwood, California native flashed his power in different ways on the two blasts.

“Coach (Josh) Elander is the guy who pounded his fist on the desk early in the year and said, ‘Blake Burke needs to have this many at-bats.’ He doesn’t do that often. So you know he has got some conviction to him if he says that,” Vitello said. “The kid can hit. I have said that a million times to the media. If anything, I do recognize that. But it is important for these young guys to get reps so they can settle in a little bit or not try so hard. I think that is what you have seen the last two times out. It is deep in the year now. There is no point in overthinking it or even looking at your numbers because they are only going to change so much. You just play ball when you get an opportunity. He certainly did that and did a great job of it tonight.”

In Burke’s two-out, fourth inning home run, the freshman was well in front of the ball and still flipped it over the right-center wall with ease.

He sends an absolute rocket outta right field and UT goes up 4-1!

Redmond Walsh Moves A Save Away From Program Record

Redmond Walsh recorded the final four outs for Tennessee, marking his sixth save of the season and 22nd of his career.

It moves the left-handed pitcher just one save away from tying Todd Helton’s program-best 23 career saves. Much like Lipscomb chasing the home run record, Walsh has a great chance of overtaking Helton if Tennessee makes a deep run in the NCAA Tournament. 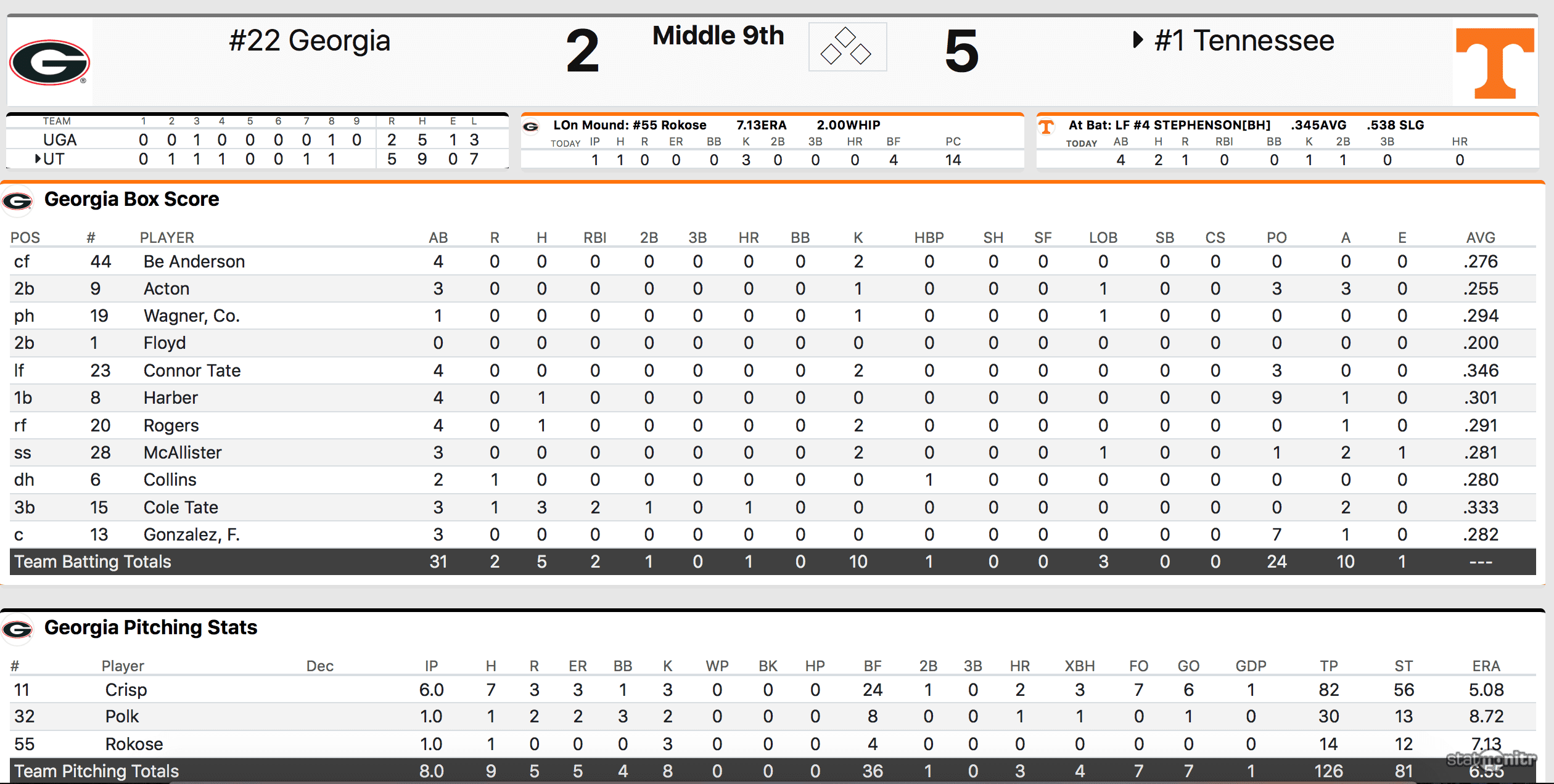 Tennessee and Georgia resume their weekend series Friday at 5:30 p.m. ET. The SEC Network will broadcast the game.