Tony Vitello mixed up his weekend rotation as missed opportunities and a huge Georgia seventh inning led to an, 8-3, Bulldog victory.

Here’s everything to know about the series finale.

After clinching the regular-season SEC Championship on Friday, Tony Vitello made a major change to his weekend rotation.

Right-handed reliever Ben Joyce made his first career start as Vitello and pitching coach Frank Anderson decided to bring freshman Drew Beam out of the bullpen for the first time.

“I think the thing you come back to is he’s earned it,” Tennessee head coach Tony Vitello said. “He’s certainly capable of it. He proved that against Auburn and in other situations. We can talk about that topic for a long time and I can answer any questions, but I think it’s all summed up by the fact he’s earned it so we gave it to him. We got better because he was able to get out there and pitch a little bit.”

How did Joyce fair starting a game?

Pretty well. The redshirt-junior was dominant for much of his outing, but a pair of fourth inning home runs gave Georgia a 3-2 lead.

Joyce bounced back from the back-to-back home runs to retire the final two batters of the inning before passing the ball to the bullpen.

What Joyce’s start will lead to is unclear but it’s a great opportunity for Tennessee to be able to test out different pitching combinations at this point in the season.

As has been the case in many of its losses this season, missed opportunities plagued the Vols’ offense in the series finale.

Tennessee was on the verge of jumping on Liam Sullivan in the first inning taking a 1-0 lead with two runners in-scoring position with one-out. The baserunning mistakes that have plagued Tennessee as of late  showed up again.

Drew Gilbert thought a Trey Lipscomb liner was going to drop for a single. Instead, Ben Anderson made the catch and threw Gilbert out at second to end the inning.

The other major missed opportunity came with Tennessee trailing, 3-2, in the fourth inning. Tennessee loaded the bases with nobody out, but only scored one run thanks to a Cortland Lawson walk.

The three other batters after Tennessee loaded the bases all struck out looking.

In total, Tennessee stranded seven runners on base and didn’t threaten after Georgia took the lead in the seventh inning.

Kirby Connell has played a limited role in Tennessee’s loaded bullpen this season, but has continued to earn opportunities, mostly as a lefty specialist to get an out or two.

The left-handed pitcher relieved Joyce to open the fifth inning and turned in his longest and best outing of the season.

Connell retired all six batters he faced in two innings while striking out the first five. He got some help from Drew Gilbert to get the one out that was in play as the center fielder made an impressive diving catch to end the top of the sixth inning.

AIR GILBERT!! Drew lays out and makes a spectacular catch to end the sixth 🤩

How Vitello manages his litany of arms in the postseason will be interesting and challenging, but Connell has been more crisp as of late and Saturday’s outing was his best yet.

After his two elite innings, Connell passed the ball off to typical Sunday starter Drew Beam. Vitello said he wanted Beam to pitch out of the bullpen before postseason play began and the freshman did just that.

It was a short and ineffective outing for Beam. The Murfreesboro native retired the first batter he faced before three straight singles loaded the bases and ended his day.

While the bunt gave Georgia the lead, it was just a run and the Vols had one of their best relievers on the mound. That’s when things escalated.

Cole Tate continued his dominant weekend with a two-RBI single before Connor Tate took Walsh to deep to left field.

Just like that, Georgia led by five runs late in the game. 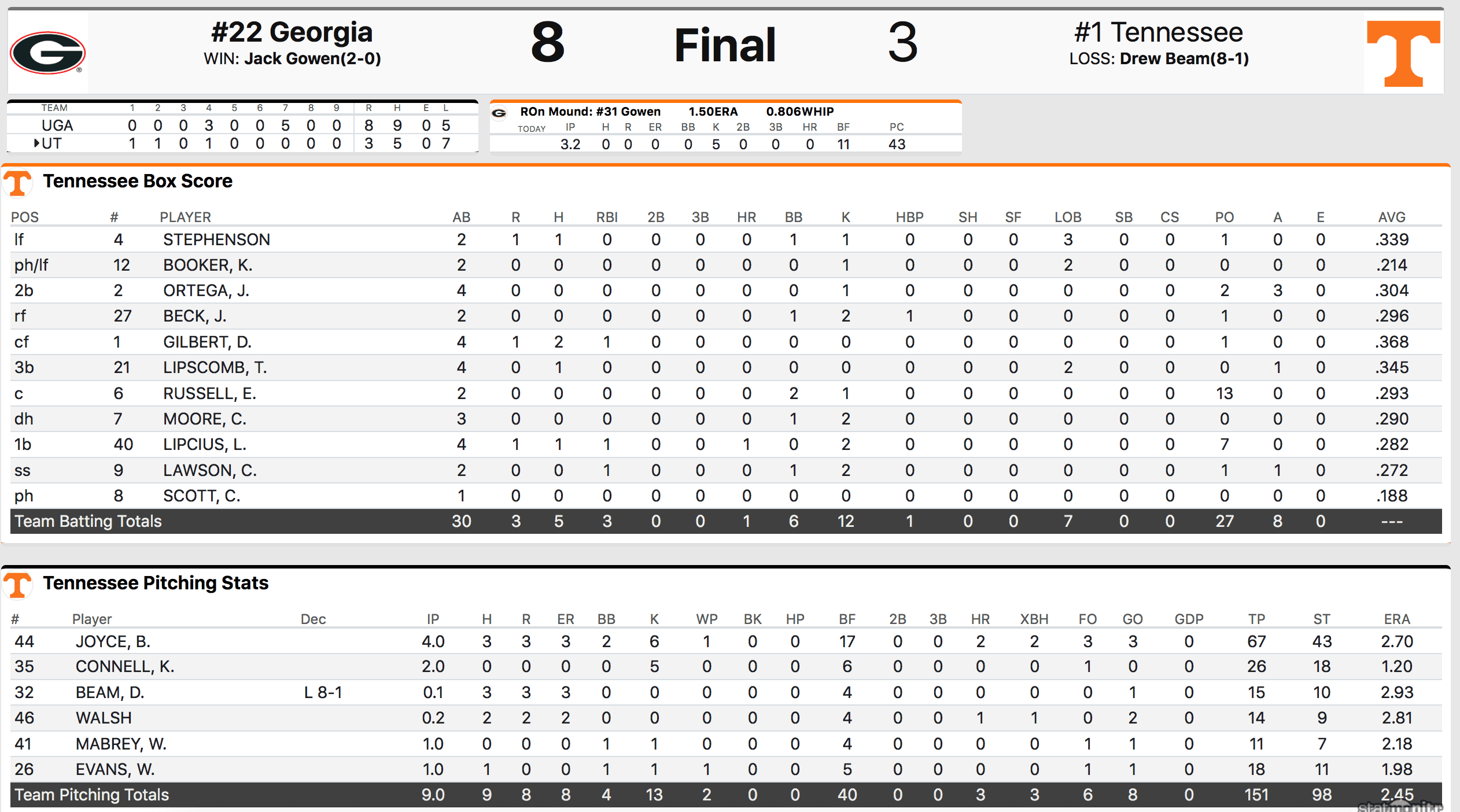 Tennessee returns to Lindsey Nelson Stadium on Tuesday for its final midweek game of the season. The Vols host Belmont at 6 p.m. ET. The game will be streamed on the SEC Network+.